New COVID-19 variant identified in South Africa: Here's what you need to know

On Friday, 18 December 2020, Minister of Health, Dr Zweli Mkhize, announced that a new variant - called the '501.V2 variant' - of SARS-CoV-2 (the virus that causes COVID-19 disease) had been identified in South Africa. How does a variant originate? What does this mean for you? How does this affect our vaccine roll-out?

The COVID-19 virus' genome is made up of a single long piece of ribonucleic acid (RNA) that carries the virus's genetic code. So far, studies of the genetic evolution of SARS-CoV-2, the virus that causes COVID-19, seem to show that it's mutating slower than other RNA viruses (like the viruses that cause flu and measles), but it is changing nonetheless.

Why isn't it unusual for a virus to evolve and develop a new variant?

Since the start of COVID-19 in South Africa, there have probably been a few variants of SARS-CoV-2 spreading in the country. However, none of them became as dominant as quickly as the new 501Y.V2 variant did. That's why experts are focusing on the South African variant and want to understand it better.

Keep in mind that it's not unusual for a virus to evolve and develop a new variant. In fact, COVID-19 is itself a disease caused by a new coronavirus strain. Coronaviruses belong to a huge family of viruses that we have known about since the 1960s.

This also means that the new variants reported in South Africa and the United Kingdom are not the only COVID-19 variants that we'll see. Other dominant variants could emerge over time, which is why it's essential that we do all we can to slow the spread of infection and bring the pandemic under control.

The 501Y.V2 variant has multiple mutations (changes) in the spike protein on its surface. These changes help the virus latch on and bind more tightly to human cells, and may help the virus evade some of the anitibodies.

How has the 501Y.V2 variant impacted South Africa's second wave of infection?

It's been suggested that the second wave of COVID-19 infection that South Africa is currently experiencing is strongly driven by SARS-CoV-2 501Y.V2.

When the 501Y.V2 variant was announced by the National Department of Health, South African clinical infectious diseases epidemiologist Prof Salim Abdool Karim (co-chair of the South African Ministerial Advisory Committee on COVID-19 and government's top adviser on the pandemic) said the second wave was showing some early signs that it was spreading faster than the first wave. The 501Y.V2 variant has been dominant in samples analysed by the genomics team on the evolution of SARS-CoV-2.

According to an update on 18 January 2021 by Prof Karim, the 501Y.V2 variant is 50% more transmissible than previous variants.

Does the 501Y.V2 variant cause different symptoms or require different treatment?

No. There is no evidence that the new variant causes more severe COVID-19 than in the first wave of infection. Symptoms of the disease remain the same as they did in the past. And clinical management or treatment for this variant of COVID-19 also remains the same for now.

Can you be infected with the 501Y.V2 variant if you already had COVID-19 from other variants?

We know that people who have recovered from COVID-19 infection are usually protected from being infected a second time (re-infection) for at least five to six months or possibly longer. That's because they develop neutralising antibodies that remain in their blood. These antibodies bind to specific parts of the spike protein on the virus that causes COVID-19 and prevents the virus from connecting to your cells. However, its these very spike proteins that have mutated in the 501Y.V2 variant. These mutations mean the virus can escape antibody neutralisation.

According to the National Institute for Communicable Diseases (NICD), blood samples from half of the people tested showed that all neutralising antibody activity was lost in people who were infected with the 501Y.V2 variant. The NICD adds: "This suggests that they may no longer be protected from re-infection. In the other half, the levels of antibodies were reduced and so the risk of re-infection is not known."

"It is therefore important that people who have previously had COVID-19 continue to adhere to public health measures. The use of masks in public spaces, regular washing or sanitising of hands, cleaning of surfaces, and social distancing remain the best defence against all SARS-CoV-2 viruses, including the new lineage."

Do these mutations change the way the virus spreads between people?

No, the virus still spreads by droplets and contact with surfaces that the virus is present on. So we have to keep practicing the preventive measures we all know prevent our exposure to COVID-19 including:

Yes, they can, so the testing process remains the same.

Are there any changes in the isolation or quarantine protocols for infections with the 501Y.V2 variant?

There are no changes. To recap:

On 7 February, South Africa stopped its rollout of the Oxford / AstraZeneca vaccine to healthcare workers (people to be vaccinated in Phase 1 of the country's vaccine rollout strategy). This followed the release of preliminary data showing that this vaccine offers minimal protection (22% efficacy against mild and moderate COVID-19 illness when it is caused by the 501Y.V2 virus variant. This variant is responsible for roughly 90% of COVID-19 infections in the country's second wave of infection, so it's very important that any vaccine rolled out has a high level of efficacy in preventing COVID-19 illness.

Do other vaccines offer higher levels of protection against the 501Y.V2 variant?

This variant has decreased the level of protection offered by virtually all of the vaccines developed in recent months as they were developed with the first dominant strains of COVID-19 in mind - these strains caused first waves of infection around the world in 2020.
However it seems that some of the other available vaccines show good efficacy in protecting us against severe COVID-19 illness and death caused by the 501Y.V2 COVID-19 virus variant.

5 min read
There's never been a more important time to protect yourself against COVID-19 misinformation. Debunking misinformation is essential when it comes to the safety and efficacy of delivering vaccines to fight the virus.

5 min read
COVID-19 is a disease caused by SARS-CoV-2. Other conditions caused by viruses include the common cold, flu, measles, chickenpox and many more.Watch this video by Johns Hopkins Medicine to understand how coronaviruses work and what they do once they infect a host. 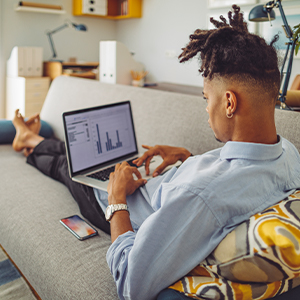 8 min read
In his 11 January National Address, President Cyril Ramaphosa made it clear that South Africa, like countries the world over, is undertaking a massive COVID-19 vaccination programme...

Understanding SA's vaccine rollout plan: Where do you fit into #VaccineRolloutStrategySA