Vitality Weight Loss Rewards is a weight-loss journey that aims to help you lose weight in short, manageable cycles until you reach a healthy weight. You earn rewards for participating and for reaching goals. For Sean Venske, it meant a new life.

Sean Venske is almost half the man he used to be - literally. In February 2017 he weighed 132.8kg. "My current weight is 79.6kg. I am at a comfortable weight and keeping it there is now my goal. The motivation I got from my second cycle of Vitality Weight Loss Rewards has helped tremendously throughout my journey."

Sean's struggled with weight gain all his life. Fifteen years ago he managed to lose 40kg, but soon put it on again. That common companion of morbid obesity - low self-esteem - was something he had learnt to endure. By 2016, at 132kg Sean was morbidly obese. "My joints ached, I had permanent pain in my right knee and couldn't walk without feeling out of breath," says the 43-year-old Benoni-based construction site health and safety officer and father to two boys. "Long-term sedentary lifestyle and eating habits had caught up with me," he explains.

When heart palpitations started in mid-2016, his GP found he was at risk of a heart attack. Then, a Vitality Health Check early in 2017 showed his cholesterol was elevated.

"I was, by then, emotionally at rock bottom, avoiding restaurants or socialising with anybody but my closest friends and family. I'd had two rough years emotionally and financially and with that stress on top of my weight, my health took quite a knock. I had no will left to deal with the weight," says Sean.

His wife Lydia, also struggling with weight, joined the Curves women-only gym in October 2016 and seeing Lydia getting into shape motivated him to keep up.

In February 2017 he began doing Weigh-Less and continued for nearly three months with some success. "Then I came across Vitality Weight Loss Rewards (WLR), in mid-April that year, he says. So motivated at having come down to 113 kg (from 132kg), especially having been rewarded with up to 50% cash back on his HealthyFood purchases, he reached his first cycle goal of 109 kg in nine weeks, (on June 27th). This was three weeks short of the recommended 12-week cycle, also earning a bunch of Vitality Active Rewards points in the process.

He immediately began a second 12-week Vitality WLR cycle on June 27th, (starting at 109kg), and had reached his 100kg goal weight by September 16th - two weeks short of the 12-week cycle. (Vitality recommends losing a maximum of 1kg per week as part of a safe weight-loss journey). On a roll, Sean began a third cycle two days later and had reached 97.4kg after three weeks. 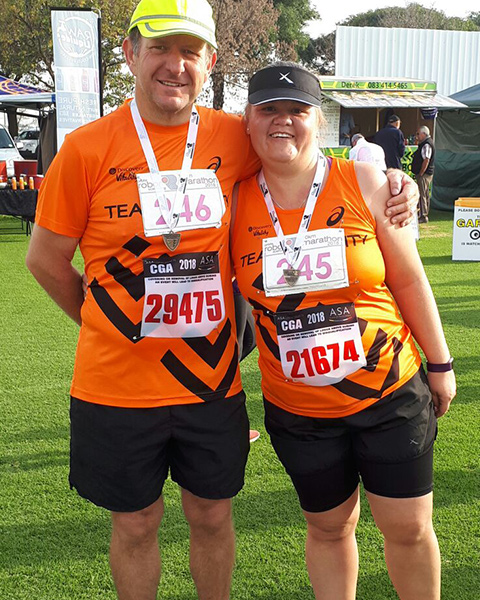 Sean at his current
weight - a healthy 79kg

Tapping into the numerous Vitality benefits

"The weekly self-tracked weigh-ins and verified weigh-ins at the end of the cycles are just the right medicine to continue improving. Vitality Active Rewards (VAR) are working for me. I'm logging my steps on my daily walks which keep me on the straight and narrow. The HealthyFood cash back benefit is a major financial windfall at the end of every month," he adds, having achieved a 50% cash back on all healthy foods for his three months on Vitality WLR. They also regularly take advantage of flight discounts on kulula.com. "For years all I used was the Vitality Ster Kinekor benefit. But, now that I am utilising Discovery Vitality to its full potential and in the process greatly improving my health and having fun doing so, my only regret is not having started earlier." The Venske family reached Vitality Gold Status in April 2018. "My faith in the Discovery brand is so strong that I am now also a Discovery Life and Insure client," adds Sean.

"My lifestyle has changed completely"

"I've done a 100% lifestyle turnaround," he says. He's back eating the right amounts of the right food groups. "I'm exercising every day and my family and I started doing parkrun events at the beginning of December 2017. By the end of June 2018 we had completed our 25th run together at Ebotse parkrun. It's a fun and fantastic initiative supported by Discovery Vitality," he adds. "I recently got a Fitbit activity tracker and linking it to my Vitality profile has taken my exercise routine to a whole new level. Before I had the Fitbit I used an app on my cell phone to count steps towards reaching a low VAR weekly goal and the Fitbit makes it that much easier to reach my 900-point weekly VAR goal."

Sean and Lydia are both Team Vitality members and have this year run an 8km and (their first) 10km race along with a couple of 5km fun runs with their sons. "We have entered and are very much looking forward to the Vitality Run Series coming up in August and September 2018," he adds. Having now met two of his goals - running as a Team Vitality member and running parkrun regularly - Sean's next goal is to run a half marathon next year.

"I see and feel the difference every week"

"I have to thank my wife Lydia and my sons, Nicholas and Brandon for their rock solid support. My thanks also to Weigh Less for providing me with the tools to maintain a healthy eating plan. My thanks and sincere appreciation to Discovery Vitality for providing me with the means and tools to improve and now, maintain my health. I see and feel the difference every week as my health improves and I have to work harder to earn my VAR points. Through Team Vitality I set myself new goals to work towards, running longer distances and improving my times. Through Vitality's sponsorship of the Parkruns I get to spend an hour every Saturday morning with my family, out in the open enjoying the exercise and time together. And, thanks to WLR, I had the motivation to keep going even on the hard days because I wanted to record regular losses and the additional cash back was always a welcome bonus."

What did Sean think of his WLR experience?

"Considering where I was at the beginning of this year Vitality Weight Loss Rewards has been a tool to turn my life around. I'm really very grateful to Discovery and Vitality for helping me and other people improve their lives and lifestyles."

What is Vitality Weight Loss Rewards?

Vitality Weight Loss Rewards (WLR) is a weight-loss journey that aims to help you lose weight in short, manageable cycles until you reach a healthier weight. You will earn rewards for participating and for reaching your goals.

Find out more about activating WLR and changing your life.

Self-discipline is that much easier with Vitality Weight Loss Rewards

Vitality Weight Loss Rewards just helps you keep going with its encouraging feedback messages and enabling you to track your weight loss. That's very motivating. Once I got into the habit of eating properly and doing all the right things, it changed my way of life. Read Dawn Zaal's weight-loss story.

Vitality Weight Loss Rewards (WLR) is a weight-loss journey that aims to help you lose weight in short, manageable cycles until you reach a healthier weight. You will earn rewards for participating and for reaching your goals. This is Johan van den Berg?s story.

'How my Apple Watch saved my life'

When Russell Pengelly got his Apple Watch, he planned to use it to get healthier through Vitality. Little did he know it would end up saving his life