This International Nurses Day, we celebrate two of Umthombo Youth Development Foundation’s nursing graduates who are making a difference in their community: Nobuhle Menyuka, nurse and role model, and Zamani Dlamini, a leader in the fight against TB.

In honour of International Nurses Day, Discovery interviewed two nursing graduates of the Umthombo Youth Development Foundation who are making a significant impact in the Umkhanyakude district of KwaZulu-Natal.

“I grew up in a rural area called Manguzi in KwaZulu-Natal,” says Nobuhle Menyuka, a professional nurse at Hlabisa District Hospital in Umkhanyakude. “I was the third-born child in a family of nine and my mother and grandmother raised me. Going to school was a challenge. I had to wait for my elder sisters to complete school first because my mother could not afford to educate us all at the same time.”

Nobuhle’s passion for nursing started in grade eight when she took care of her sick grandmother. “She had high blood pressure and I used to remind her all the time to take her medicine and eat well. That's when I saw how important it is to help people who are sick.”

Nobuhle enrolled at the University of Zululand in 2002 but struggled to fund her studies. “I couldn’t register for my third year because I owed the university fees, so my friend from Ingwavuma told me about Umthombo.” She secured a scholarship and graduated with a bachelor of nursing science degree in 2006.

“To become a nurse and a leader in my community means a lot to me,” she says. “I feel humble and privileged to help sick people from deep rural areas because it’s where I come from. They trust and believe in me. That’s why I'm still working in rural hospitals even though the conditions are not ideal. We have limited staff and no resources or equipment so I need to improvise with the little that I have.”

Nobuhle says teenage pregnancy is a major issue in her community. “It’s important for me to be a role model to young people because they can see it’s not about where you come from but how dedicated and passionate you are,” she says. “Young children look up to me. If they have challenges, they come and ask me for advice.” 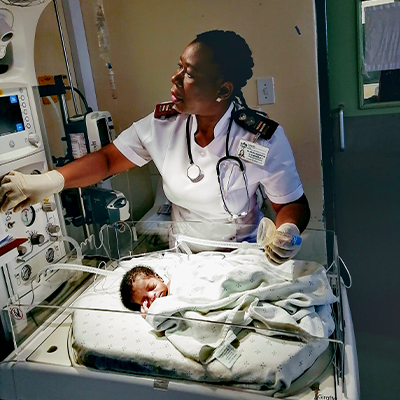 Professional nurse, Nobuhle Menyuka, strives to be a role model for children in her community.

At the time of writing, Nobuhle was on the frontline as an essential worker fighting COVID-19. “As nurses, we’ve pledged that the total health of our patients will be our first consideration,” she says. “But we don’t have equipment or protective clothing to deal with the situation. It’s difficult to stay motivated, but I have faith that everything shall come to pass. God will never leave or forsake us.”

From taxi driver to professional nurse and TB project leader

“I come from a small village called Mpembeni-Sovane in Hlabisa where we still share the river with cows and donkeys,” says 37-year-old Zamani Dlamini, the KwaZulu-Natal provincial manager for the USAID Tuberculosis South Africa Project in the uMkhanyakude and eThekwini district.

“In 1999 when I was in grade 11, my grandmother was diabetic and I took her to the clinic and hospital every month. I was inspired when the nurses educated her on how to control her blood sugar, give herself insulin injections and care for the septic wound on her left foot. There was no one at home to care for her, so I did it. That’s where my passion for helping others developed.”

“I finished my matric in 2000 and there was no money to study,” Zamani continues. “I became a taxi driver for four years at Hlabisa taxi rank but my dream of becoming a nurse was always there. One day, a nurse got in my taxi and told me about Umthombo at Hlabisa Hospital. She told me that I could volunteer at the hospital for a week under my chosen discipline.”

“That afternoon, I went to the hospital and met Dumisani Gumede who was a coordinator for the Umthombo scholarship programme. He explained everything and I started volunteering at Hlabisa Hospital’s outpatient department for one week and ended up staying for four weeks. I started seeing myself as a nurse who could help people where I come from.”

Umthombo gave him a scholarship and Zamani earned a bachelor of nursing science degree from the University of Zululand in 2011 with distinction. He also has a bachelor’s degree in nursing education and administration, a postgraduate diploma in primary healthcare, and is doing his master’s degree in public health at the University of Johannesburg. He aspires to have a PhD in public health in five years. 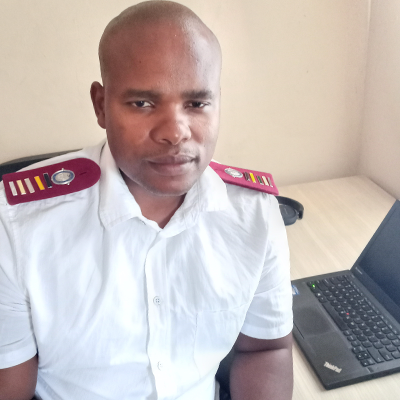 Zamani Dlamini, professional nurse and recognised leader in the fight against TB

Zamani plays an active role in raising community awareness on the spread of TB infections. “TB remains the number one killer disease in South Africa and there is a lot that needs to be done,” he says. “The TB South Africa Project is helping to reduce TB infections with the goal to end TB once and for all.” He says the COVID-19 pandemic has increased the need for education and prevention of both conditions in communities.

In 2019, Zamani presented on the importance of interpersonal communication and counselling in TB management at the 50th Union World Conference on Lung Health in India. And in 2014, he won the International Council of Nurses’ Leading Lights Award for making a significant improvement in the fight against TB.

“Thank you to Umthombo for giving me a real chance in life. I cannot forget the opportunity that was given to me, and I promise a lot is still coming.”

THIS ARTICLE IS THE THIRD IN A SERIES ON THE UMTHOMBO YOUTH DEVELOPMENT FOUNDATION, SUPPORTED BY THE DISCOVERY FUND. IN JUNE, WE’LL FEATURE THE YOUNG DOCTORS OF THE FUTURE.

Helping students from rural KwaZulu-Natal qualify as healthcare professionals is about more than providing scholarships. At Umthombo, dedicated mentors empower students to overcome challenges, build resilience and take care of their mental health.

Like any hero's journey, the Umthombo Youth Development Foundation faced many challenges in its quest to create a community of healthcare workers. Read this inspiring story of a community investing in each other to reshape the future of rural healthcare.