Like any hero's journey, the Umthombo Youth Development Foundation faced many challenges on its quest to create a community of healthcare workers. Read this inspiring story of a community investing in each other to reshape the future of rural healthcare.

When Dr Andrew Ross joined Mosvold Hospital in 1990 in Ingwavuma, 410 km from Durban in KwaZulu-Natal, he faced two challenges: staffing and funding. He started the Friends of Mosvold Trust in 1995 to help solve these challenges, which in 2010 became the Umthombo Youth Development Foundation. The aim? To find rural healthcare students, invest in them, train them, and have them work in rural hospitals in the area.

To date, the foundation has had 428 graduates across 18 health science disciplines. The Discovery Fund began supporting Umthombo in 2001, and its investment of R15 million has helped 43 students graduate in 12 disciplines. Umthombo continues to support around 250 students every year. About 98% of graduates fulfil their work-back obligation and around 60% stay in rural areas after it’s finished. The impact? Well-resourced hospitals in rural settings with local employees offering comprehensive healthcare services to rural communities.

Watch this video for more on Umthombo.

It began back in 1990, when Dr Andrew Ross joined Mosvold Hospital in Ingwavuma, 410 km from Durban in KwaZulu-Natal. Five doctors were then working in the 250-bed district hospital, which serves 110 000 people between the borders of Swaziland, Mozambique and the Pongola River.

In the decade that followed, Dr Ross had two epiphanies that eventually lead to establishing, in 1995, the Friends of Mosvold Trust. This would become the Umthombo Youth Development Foundation 15 years later.

Epiphany 1: “Staffing is your responsibility”

In 1992, three doctors departed from Mosvold, leaving Dr Ross with two doctors. “We’d contacted the provincial administration who promised us doctors, but when the rubber hit the road no one came,” Dr Ross recalls. A colleague at another hospital told him that as the person on the ground, staffing was essentially his responsibility. He advertised in the South African Medical Journal and the British Medical Journal, but mostly British doctors responded, eager to work in Africa. “South Africans generally didn’t want to come to rural areas,” Dr Ross says.

Epiphany 2: “The government isn’t the only source of funding”

The second epiphany came soon after Dr Ross arrived at Mosvold. The area suffered a huge measles outbreak with a few deaths a month. “It’s a preventable condition; you just need to be immunised,” Dr Ross explains. “The World Health Organization found that if you live more than 5 km away from an immunisation point, your child is less likely to get immunised. We needed to get an immunisation service within 5 km of every homestead in our health district.” The hospital had four clinics and two mobile services but needed more employees and another vehicle. The administration gave him more healthcare workers but no vehicle.

Again, a colleague told him something invaluable: “The government is not the only source of funding.” Dr Ross started the Friends of Mosvold non-profit organisation and raised enough money to buy an extra vehicle for their immunisation service. This let them go to 40 points, and measles started decreasing dramatically. “Following this we raised money for vehicles for the facilitators for the community healthcare programme,” Dr Ross says.

For a while, Mosvold had its staffing and funding challenges under control. But as the 90s ended, it became harder for foreign doctors to work in South Africa. Dr Ross ideally wanted South African doctors who could speak local languages, but found it difficult to entice them to come to Mosvold.

To make Mosvold attractive as a training hospital for young doctors, Dr Ross partnered with Medunsa and developed a postgraduate training programme in Family Medicine. “We sent flyers to 2 000 junior doctors. From that we got two people: Hennie Hamilton and Colin Pfaff. Hennie initially started at Bethesda hospital but moved to Mosvold in 2004 where he is currently the CEO.”

Then Dr Ross had an idea, based on research in Canada and Australia: “If we could find rural students and train them, they would be more likely to come and work, and stay, in a rural hospital.” He adds excitedly: “If this worked, it could solve our staffing problems and we’d have doctors who speak local languages!”

His enquiries faced much scepticism. It’s a bad investment, people said. Rural students often fail at university. The pass rate is poor. Plus, they promise to come and work but don’t. And it’s expensive, they added.

“We thought, what are we going to do?” Dr Ross chuckles, “and we said, we’re going to give it a crack.”

You need more than doctors to run a hospital

“We contacted all seven high schools in the Ingwavuma area, looking for the best students. Initially we were only looking for doctors but then we thought you need more than doctors to run a hospital, “Dr Ross explains. “You need a pharmacist, a dentist … we had many doctors pulling out teeth. You must have decent hospital staff and not always just make a plan.”

Dr Ross invited the area’s schools to send their top 10 students to the hospital for an open day. They showed around 100 students how a hospital works and the marks they’d need to enter a university health programme, and shared the idea for a scholarship programme.

The proposal was at first for four scholarships a year, under these conditions:

Then came the hard part – raising money and getting community buy-in. Dr Ross says: “I went to the tribal authorities and I said, ‘we’re starting a scholarship fund, we’re going to staff our hospital with locals who can speak the language but it’s very expensive. Is it possible that everyone in the area contributes R1?’ It was a way to raise money from local communities and getting people to speak to their kids to apply. Many kids in rural areas think there are no opportunities. Then I went to the staff and asked each person to donate R50.”

“In January 1999, three guys came to me – Frans Nxumalo, Dumsani Gumede and Nkosingiphile Nyawo and said, you said you were running a scholarship scheme. We got places at university, are you in? I had R30 000 in the bank. Each student needed about R70 000.” At the time, Friends of Mosvold had an agreement with MESAB (Medical Education for South African Blacks) to contribute half of the university costs. So essentially, Dr Ross had R60 000. But he needed more for books, accommodation, food and support. “We had to make sure they had the greatest chance of success,” he explains. The students went off to university, and the Friends of Mosvold yet again made a plan.

“We did a combination of things to raise money, writing letters, speaking to everybody we could. I wrote to the Swiss South African Cooperative Initiative (SSACI) and I said I need R1.5 million. And they wrote back and said, yes, we’ll give you everything you ask for.” Dr Ross laughs. “Now we had more money than we needed. We decided to involve three other hospitals in the area. By 2008, we were supporting 55 students.”

Dr Gavin MacGregor became the new director in 2009 and in 2010, the Friends of Mosvold Scholarship Scheme changed to the Umthombo Youth Development Foundation. So far, the foundation has had 428 graduates across 18 health science disciplines, as the infographic shows.

“The Discovery Fund began supporting Umthombo in 2001 and has to date contributed over R15 million towards their activities,” says Lisa Temkin-Todes, Client Relationship Manager at Discovery.

So far, Discovery’s investment of R15 million has helped 43 students graduate in 12 different disciplines, as seen in the infographic supplied by Dr MacGregor. With the Discovery Fund’s investment, Umthombo is supporting 30 students at the moment, with future students set to benefit from it as well.

In 2006, the scholarship scheme became the first recipient of the Discovery Foundation Excellence Award to the value of R1 million. “The amazing thing about that was it meant I could put a significant amount of money into supporting our students. And it allowed me to employ Ruth Osborne, an organisational development person, to help me with the fundraising and think about the future of Friends of Mosvold,” Dr Ross says. 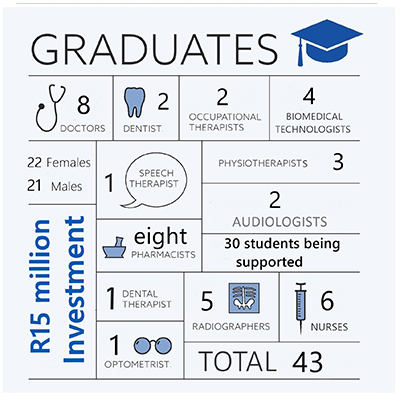 Umthombo now supports around 250 students every year. “About 98% of graduates fulfil their work-back obligation and around 60% stay in rural areas after it’s finished,” Dr Ross says.

The impact? Well-resourced hospitals in rural settings with local employees offering comprehensive healthcare services to rural communities. And that’s how you do it in Ingwavuma.

This article is the first in a series on the Umthombo Youth Development Foundation. In April, we’ll speak to Ntombenhle Mkhize about mentorship’s huge impact on the Foundation’s students’ lives and pass rates.

A new generation of healthcare professionals

Discovery and the Umthombo Youth Development Foundation are empowering youth from rural areas to pursue a qualification in healthcare and give back to their communities.

Click here to watch Umthombo graduates share about their experience and the incredible impact it’s making in improving the country’s shortage of healthcare professionals.

The Hlokomela programme, built around the passion of Christine du Preez, a nursing sister married to a Limpopo fruit farmer, is an impressive demonstration of the power of strategic partnerships for social good.

In March 2019 Discovery hosted a conference aimed at encouraging fellow corporates to join in pooling resources for social impact. In this series, we look at the transformation that occurs when companies and organisations become partners for social good.

Working together to enhance training and advocacy in the public and private sector, the Discovery Fund and the Breast Health Foundation have made a significant impact in the detection, diagnosis and referral of breast cancer patients in South Africa.