Hearing recovery for mother and son

Haidee Olivier lived most of her adult life unaware she couldn’t hear properly. When her son Tiaan was born with only one ear, his audiologist diagnosed them both with Microtia and Atresia. With their hearing restored, life has infinite potential.

Haidee and Tiaan shared their touching story with the Discovery Health Medical Scheme in 2017.

Having slipped through the diagnostic gaps as a child, suffering interminable teasing and bullying for not listening (as she couldn’t hear) at school, Haidee was only diagnosed with Microtia and Atresia just after Tiaan was born. Tiaan, now seven years old, was born entirely without one ear, leaving him totally deaf on his left side.

An audiologist brought in by her gynaecologist was horrified to accidentally discover that Haidee had lived her entire adult life without proper hearing. "In my case, my left ear was only one centimetre smaller than the right one. You can't see it unless I point it out, but I was told I was naughty at school because I never seemed to listen. Children were horrible to me. Eventually I hated school so much that I bunked an average of two days a week for my entire matric year. They said I was stupid, and eventually I started believing them. I had no idea I was partially deaf. What I could hear was normal for me. I gave my netball teacher heart palpitations when I regularly turned up for practice, having missed her morning maths classes," she laughs.

Microtia refers to an external deformity where the ear is underdeveloped or missing (microtia-anotia). Atresia refers to the narrowing of a passage or opening in the body (in this case, the ear canal). Haidee now sports a Med-El Bonebridge device and Tiaan a Med-El Vibrant Soundbridge hearing aid, (the Soundbridge anchored via a hole in the skull to the hearing bones in her middle ear, the Bonebridge is anchored in the skull).

Getting to this point hasn’t been easy – especially for Haidee. She describes three extremely painful and unsuccessful procedures in her early twenties. Surgeons removed and replaced the hearing bones in her middle ear with a prosthesis. After an operation to fit a bone-assisted hearing aid (BAHA) in 2014, the surgical wound became infected. “I kept on getting horrible infections around my BAHA abutment, which made life unbearable,” she says. She had the subsequent operation to fit her Med-El Bonebridge device in March 2017 and found it absolutely amazing to be able to hear properly for the first time.

Previous, unsuccessful procedures left her floundering in corporate IT meetings where sounds merged and she was unable to follow a speaker unless she could see their lips moving. Her husband would call out something to her from another room and she had no idea where he was, her directional hearing completely dysfunctional. She describes her experience of the previous BAHA device as like hearing someone in a large hall with far away echoes. With the Bonebridge device, sounds are far clearer and closer. After her first fitting of the Bonebridge hearing device, the people around her asked her why she wasn’t sharing the experience them. “I was so busy marvelling at the clarity of her my new hearing that I simply wanted to keep it to myself for a while,” she says.

Due to developmental considerations Tiaan started out with a BAHA hearing aid at just under a year old, having surgery to install his the Vibrant Soundbridge device in September 2016. Watching Tiaan’s face when the audiologist first switched on the BAHA hearing aid is something Haidee will never forget. He was just stunned. “He immediately ripped his head to the left (the deaf side),” she recalls. They were told that Tiaan was actually hearing better than they were because the sound-booth test involved Tiaan throwing a block into a bucket every time he heard a sound. Several times he threw a block when they couldn’t hear a thing. They thought Tiaan was mistaken, but the audiologist refuted this saying his sound range was now better than theirs 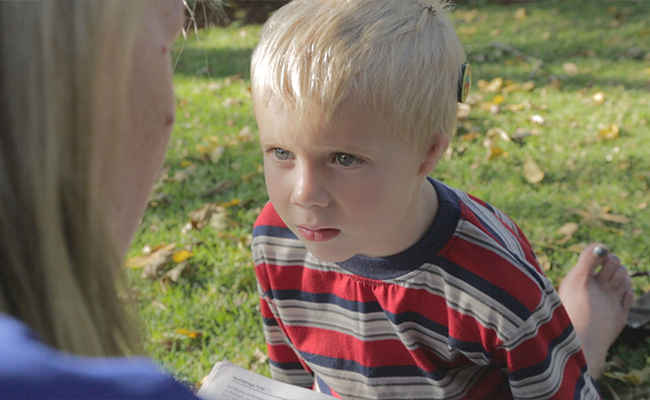 “Were it not for Discovery Health Medical Scheme (DHMS) funding multiple operations and progressive devices – totalling nearly R700 000 – and resulting in full hearing for me and Tiaan, our lives could have taken tragically different trajectories,” says Haidee. “The interventions have had a profound impact on our lives. My life without my new Med-El Bonebridge device would have been so very different. I’m really grateful. I’d like to thank the DHMS from the bottom of my heart. There is no way my son and I would have been able to have received the gift of hearing, were it not for the scheme. Words are really not enough to share our gratitude. I’d like the scheme to understand that what has been done means so much more than just giving me and my son hearing. You’ve given my son a whole new lease on life! For that, I will always be thankful.”

“DHMS is one of the few medical schemes that funds the state-of-the-art hearing implants and procedures. This means there are uncounted numbers of people in similar situations as me and Tiaan, but with insufficient knowledge or help and who face an unnecessarily muted future,” she adds.

Haidee believes that all the heartache she went through has given her the compassion and understanding she needs to help Tiaan. She recently told her story to a kindred mother waiting with her hearing-impaired son in a specialists’ surgical rooms. “She broke into tears and wanted me to tell her absolutely everything about hearing impairment. It was the first proper insight she’d had into her son’s experience,” says Haidee.

Haidee has given Tiaan’s BAHA device to a woman in Port Elizabeth whose eight-month-old baby girl suffers from an almost identical condition. “I don’t know what medical scheme they are on but she said their scheme wouldn’t even pay for the tests out of their medical savings. They had to pay for everything. There’s no way she could afford a BAHA device - the first and easiest option for a little one to start hearing,” she adds.

Asked how she and Tiaan’s lives might have turned out if they’d had lesser cover or none at all, Haidee doesn’t hesitate, “I’d have died if Tiaan wasn’t able to hear properly. It kills me to think about Tiaan going through anything remotely like what I’ve had to go through. I know how it would have killed him off, little by little as he grew up – and he’s such a larger-than-life personality.”

Asked about the genetic manifestation of Microtia or Atresia in her family, Haidee says she’s seen it nowhere else but in her children and herself. Her first-born Markus, now 23, was born with two small nodules in front of one ear. These were duly excised by a plastic surgeon and he’s never suffered any hearing impairment. Her middle-son, Janu, now 10, had no such abnormalities.

Haidee has taught Tiaan to manage his disability. At first, he was shy about his little bean-like malformed ear on the left side of his skull, but she’s now helped destigmatise it to the point where he allows people to touch his implant and tells them all about it. “I told him God made him the way he is for a reason and that he’s special enough to be chosen and strong enough to carry this. I always joke, telling him we’re the transformers.”

A transformer Haidee certainly is. Together with the founder of the Microtia/Atresia Support Group South Africa, Haidee tries to assist people whose children have hearing impairments. Seeing another young boy with the condition walk past her after one of her son’s cricket games recently helped her realise the dire societal need for information and support. “I want everybody that’s affected by these two conditions to be part of a group and not feel alone. I don’t want parents to cry non-stop for the first year of their child’s life like I did,” she adds passionately. “Tiaan attended the preschool that Haidee owns in Pretoria until 2019. “At first, it was very difficult for Tiaan to adjust to the new school as he experienced teasing and bullying as a result of his malformed ear. His teacher thankfully dealt with it very well. She really took the trouble to explain his condition to the other children and that understanding made all the difference to Tiaan’s experience and the bullying and teasing ended,” says Haidee. “Those incidents showed me the absolute need that exists to teach our children about people who are different, and reinforce that being different is not a negative thing. Our differences should be explained, explored and embraced.” Much to his credit, Tiaan started music lessons in 2019. “He loves to share what he’s learnt with us and even loves the theory of music. Watch this space, I am sure there will be recitals in his future.” Tiaan also started Grade 1 in January 2020. “I'm praying that all will go well,” adds his devoted mom.

Family history is an important part of any person's health information. MyFamilyHistory makes it easy for you to record it. The information you provide will be used to estimate your risk of developing certain common health conditions at some time in your life:

Cancer of the breast, colon/rectum, prostate, melanoma and other hereditary cancers

Find out more about MyFamilyHistory