Thermodynamics are the most powerful forces in the universe and they deal with energy. Over the past 200 years there have been three thermodynamic bursts of energy, which we call industrial revolutions. The first was the age of steam energy, which gave us mechanisation and was epitomised by the railways. The age of electrical energy gave us assembly lines, with the automobile as its epitomy. The age of computing, which followed almost a century later, has given us the World Wide Web, artificial intelligence, automation and digitisation. The British led the first revolution, the second and third – the Americans. Leading the fourth revolution? Hands down, the Chinese.

What is an industrial revolution?

The way I define an industrial revolution is that a new form of energy is released into the system. The market recognises it, as all markets do, in two ways: through demand and supply.

With demand, the rate of adoption grows at an incredible speed. Supply then has to be forthcoming to satisfy that demand. What happens next is that the supply side grows faster than the demand side. Industry sees huge volumes being demanded, and they are able to access economies of scale – the magic dust of capitalism – and translate that into an incredible increase in the volume of supply. But what happens when there is more supply than needed? Prices drop. And when prices drop, the poorer people in society can afford to buy the product – and they do. What ultimately makes an industrial revolution profoundly revolutionary is the fact that it reaches so many people in a tangible way.

The next burst of energy after steam, electricity and computing is energy itself – sun and wind. And with it comes mind-blowing potential to change the lives of billions of people.

The age of free energy

I believe that we will soon be entering the age of free energy. I say “free” but of course there is an initial set-up cost, for solar or wind farms. But think about this: we pay for coal, oil and uranium, but we don’t pay for sunshine or wind. It’s freely available. Renewable energy is vastly different from anything modern-day civilisations have harnessed before. What makes this such a profound advancement is that it’s going to make the poor so much more productive. 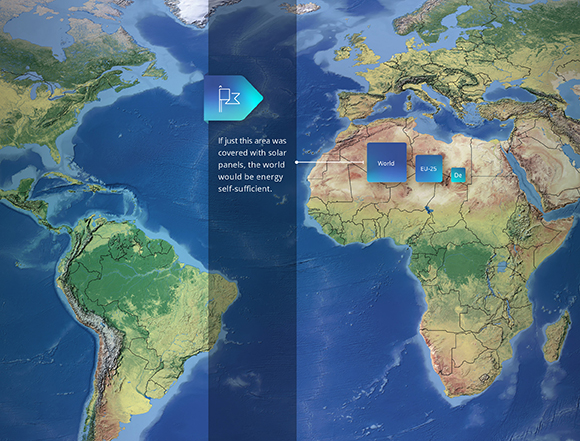 In China’s Gobi Desert, the country is building enormous sun farms (one is 6 300 acres) harvesting sunlight. They have built the largest floating solar plant in the world in Anhui province, with 160 000 solar panels spread over 86 hectares of water. According to Business Insider, China recently announced it would invest US$361 billion in renewable power by 2020. They’re also devising clever ways to reduce waste and transport electricity over vast distances. These advancements are fundamental and it is something that will change the world.

The power of wind

Wind is the other important contributor to the fourth industrial revolution story, although there are only certain parts of the world that can truly master wind power.

The UK is number one in the world of offshore wind because of its location at the end of a wind tunnel that blows off the North Atlantic Ocean. Other leaders are China, Denmark, the Netherlands, Belgium, Sweden and Germany. Towards the end of 2017, there was a weekend in Germany where storms caused an abundance of wind-generated power, resulting in negative power prices. In other words, consumers were paid to use electricity that weekend.

Give me cheap-to-free energy, and I'll give you cheap-to-free water. We've long known how to desalinate water; the technology is established. The problem has been the cost of the energy needed for the desalination process. But if energy is nearly free, there are huge areas of the world that lie adjacent to the sea that are going to be able to access water cheaply. South Africa is among them

The third dimension of this revolution is that where there is water, you can grow food. Using hydroponics, we will be able to transform huge areas of the world unable of producing anything agricultural into highly productive agricultural areas. Australia's Outback is a vast unused land mass, while the country has one of the longest salt water coastlines in the world. Put those two things together, add free energy (once systems are in place) and you have the main ingredients for turning Australia into one of the most spectacular food-growing locations on the planet.

The potential for emerging markets

Many emerging markets are poised to be beneficiaries of this new revolution. Kenya, for instance, has recently activated its largest solar power plant in the semi-arid eastern county of Garissa. The country has also announced that within seven years, 90% or more of all its energy will be generated from renewables. Anyone who has travelled into Africa recently and flown in a small plane over a relatively populated area in rural Africa will have been winked at by thousands of solar panels.

The fourth revolution could really be the era of closing the gap between developed and emerging markets.

18th-century British philosopher and economist Thomas Malthus posed the question: what are the most immediate and effective stimulants in the creation of progress for wealth? The keyword there is stimulant. Energy. What we are seeing is an energy revolution, and I predict it will change the world more than the three previous industrial revolutions combined. From an investment perspective, what does this mean? Invest in green. Not only because you are doing good but because future growth is tied to it.