It was during her paediatric department rotation at Sefako Makgatho Health Sciences University in 2003 that South Africa’s first black female paediatric oncologist, Dr Vhutshilo Netshituni, fell in love with children.

Dr Vhutshilo Netshituni has received the 2019 Discovery Foundation Rural Institutional Award to support the development and implementation of a customised awareness, education and training programme about childhood cancer. The programme will be developed in consultation with Childhood Cancer Association of South Africa (CHOC SA) at five regional hospitals and their 30 referral district hospitals in Limpopo. 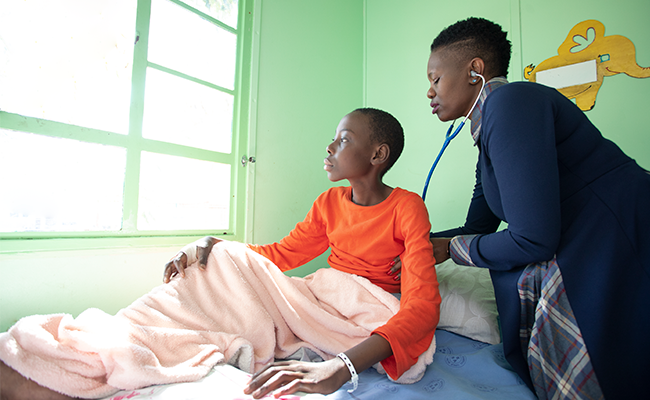 Being admired for having broken through a historical barrier is far less important for Dr Netshituni than doing what she loves. “I had no clue. I only found out about the barrier-breaking when I was waiting for my final exam results in 2016. For me it’s not about being the first, but about doing what I love. At least two black female paediatricians, coincidentally also from Limpopo, have qualified as oncologists since then, as have a handful of black men,” she says, keen to move on to what she’s passionate about.

As head of the paediatric oncology clinical unit at Pietersburg Tertiary Hospital in Limpopo, Dr Netshituni is facilitating the training of selected nurses in the region. This helps colleagues deal more effectively with patients who come from low-income areas.

Poverty, superstition and lack of education are tragic barriers to early diagnosis and appropriate care of children with cancer. Dr Netshituni will work with CHOC SA to implement a three-year, customised awareness, education and training programme. CHOC SA will conduct intensive training of 10 carefully selected professional nurses who will in turn train others to detect early warning signs of cancer – creating a healing ripple effect across the province’s referring facilities.

According to CHOC SA, the childhood cancer cure rate in South Africa is about 50% compared with up to 80% in developed countries. Here a holistic approach makes sure that children are diagnosed early, can access paediatric oncologist care, and are supported throughout the lengthy treatment phase of up to three years.

By way of contrast, Dr Netshituni tells of a young child recently referred to her unit with stage 2 cancer. She received two cycles of chemotherapy before simply defaulting on treatment. She returned much later with what proved to be fatal stage 4 cancer.

“So often it’s a lack of understanding and cultural beliefs that get in the way. In most African countries, there’s very little research or data collection, mainly because we have other health priorities. Internationally, they’re experimenting with medicine and doing stem cell transplants. Yes, we’re going somewhere, but we’re just not there yet,” she says.

Besides late referrals, another barrier to treatment is that cancer in children often presents with non-specific symptoms, which can easily be misdiagnosed as TB, for example.

Dr Netshituni says the CHOC SA training will teach nurse trainers to heighten their index of suspicion. “A child might present with night sweats, coughing and fever. It could be TB and you could start treatment − but if it doesn’t get better, it’s something else. If a child is bleeding, it has to be a haematological problem, so a simple full blood count can give you many answers. The problem is most healthcare workers don’t look for cancer,” she says.

Late referrals is a major issue

“The main issue is the late referrals and for our newly aware staff to teach the community not to sit with a sick child at home before going to a hospital. We want to increase awareness that there is cancer in children – too many are dying in district and regional hospitals owing to healthcare staff not recognising the symptoms. By the time they get to our unit we often just diagnose, start one or two treatments and then they die.”

It’s not just Limpopo that suffers. Across the country, about half of the estimated 70 to 80 cancer-afflicted children in a child population of a million do not survive owing to late diagnosis. According to CHOC SA, 1 000 children are being diagnosed with cancer annually when, based on international data, 2 500 should be diagnosed.

Dr Netshituni says CHOC SA is a vital partner in the Limpopo project. “When I started here in 2017, I had several meetings with them because they were involved in data capturing. I wanted to see how we could help with awareness and perhaps train more of our people. Once these 10 professional nurses complete the CHOC course, they’ll go on to train district nurses and doctors together and empower them. After infiltrating each district, the trainers must then identify more nurses to help carry the torch,” she says. The next phase of the project will be raising awareness through community and faith-based organisations, the media, and local structures and groups. In the third year, improvements in the early diagnosis and referral of children will be monitored against the number of children being referred and the stage of cancer.

The daughter of a domestic worker and widow, Dr Netshituni grew up in Tshilapfene village outside Thohoyandou in Limpopo. A chance visit to the Medunsa campus when her family dropped off her cousin studying dental therapy sparked her interest in medicine. “It was so exciting. I was 14 and it was a holiday trip and the medical campus was fascinating,” she says.

A hiker during her registrarship at Tygerberg Hospital, Dr Netshituni now runs 10 km three times a week and enters 21 km races whenever she can.

Dr Tumiso Malatji has received a Discovery Foundation Rural Institutional Award to fund a project that will evaluate and improve the management of cardiovascular diseases and diabetes at primary healthcare level at selected clinics in Limpopo.

While believing that education is one of the key strategies in addressing poverty, disease and crime in South Africa, specialist physician and pulmonologist Dr Donald Simon says experience has taught him that knowledge is not necessarily power.

To wrap up Mental Health Awareness Month, we honour a few of our mental health heroes – five Discovery Foundation Awards alumni and one supervisor whose positive contribution to mental healthcare has had a ripple effect across South Africa.