Improved corporate governance could turn our trajectory around

There is still a glimmer of hope that South Africa could turn around the negative credit ratings it received from the three major global credit rating agencies earlier this year.

Moody's was the last of the three major global credit rating agencies to downgrade South Africa's local and foreign currency rating after the cabinet reshuffle earlier this year.

According to Nazmeera Moola, economist and strategist at Investec Asset Management, three key drivers were identified by the three ratings agencies (Standard & Poor's, Fitch and Moody's) as reasons for the downgrades.

Moody's cited the following key drivers for its decision:

Prior to the March cabinet reshuffle, one could argue that the first point was debatable and that the latter two points were in the process of being reversed, helped by a more friendly global environment. Unfortunately, the cabinet reshuffle has weakened the counter arguments to all three of the above factors

On the back of the cabinet reshuffle, the following became clear in relation to the key drivers listed:

The ability of the president to enact a cabinet reshuffle, despite repeated warnings that it would greatly damage the South African economy, questions the strength of the checks and balances built into the country's institutions.

The drop in business and investor confidence will stunt fixed investment and consumer spending this year - damaging growth further. In addition, the rise in in-fighting within government suggests that any sensible outcome for the Mining Charter, or the resumption of Independent Power Producer Procurement Programme (IPPPP) signings is limited.

If the relevant ministers produced a surprise positive outcome on both of these issues, that would quickly boost fixed investment in South Africa in the second half of 2017; and that could lead to the very quick wins that South Africa needs. Unfortunately, this seems unlikely.

Weaker growth will lead to lower fiscal revenues and higher debt levels. While progress is being made at the SABC, governance at South Africa's biggest State Owned Enterprise (SOE), Eskom, remains questionable.

However, there remains some hope on the horizon.

How to push sentiment on an upward trajectory

"An analysis of the Fitch credit rating shows that the agency applied two qualitative downgrades for governance and the weak growth outlook, which moved South Africa's rating to sub-investment grade," Moolla says

In other words, improved corporate governance at state level could push sentiment on an upward trajectory. The first option is a massive overhaul of governance at the most problematic SOEs.

The second would be for ministers to begin enacting growth-supportive economic policies - such as a Mining Charter - that would not immediately be indicted by industry or the resumption of the IPPPP programme. Either of these sets of actions could be sufficient to stabilise South Africa's credit rating at both Moody's and S&P for at least 12 months.

For now, both local and international investors are looking to December 2017 when President Zuma is widely expected to be replaced as ANC president, with the new ANC leader likely to be put forward as the next presidential candidate. 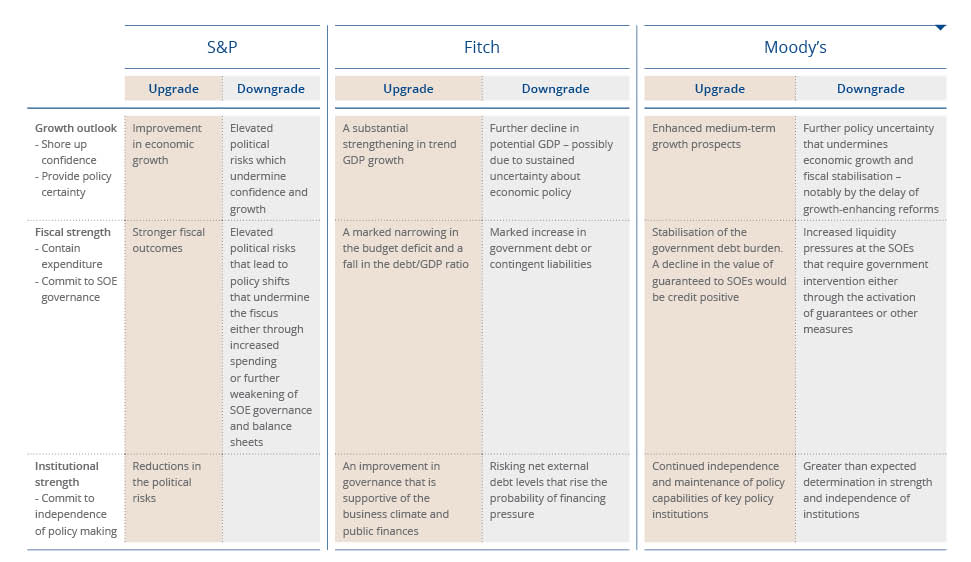 Nothing contained in this article should be construed as financial advice and is meant for information purposes only.

How to save during a recession

On the back of National Savings Month in South Africa, a recent report from the World Economic Forum (WEF) highlights the startling gaps between financial needs in retirement and what consumers are actually saving.

The psychology of saving

South Africans are well used to hearing that they don't have a great savings culture. The good news is that there has been a slight uptick in South Africans' savings habits.

The thrill of earning your first salary is huge. But not everyone manages to get their money to cover their expenses and to provide for a rainy day. Two things are really important here - becoming financially literate, and making and sticking to a budget.