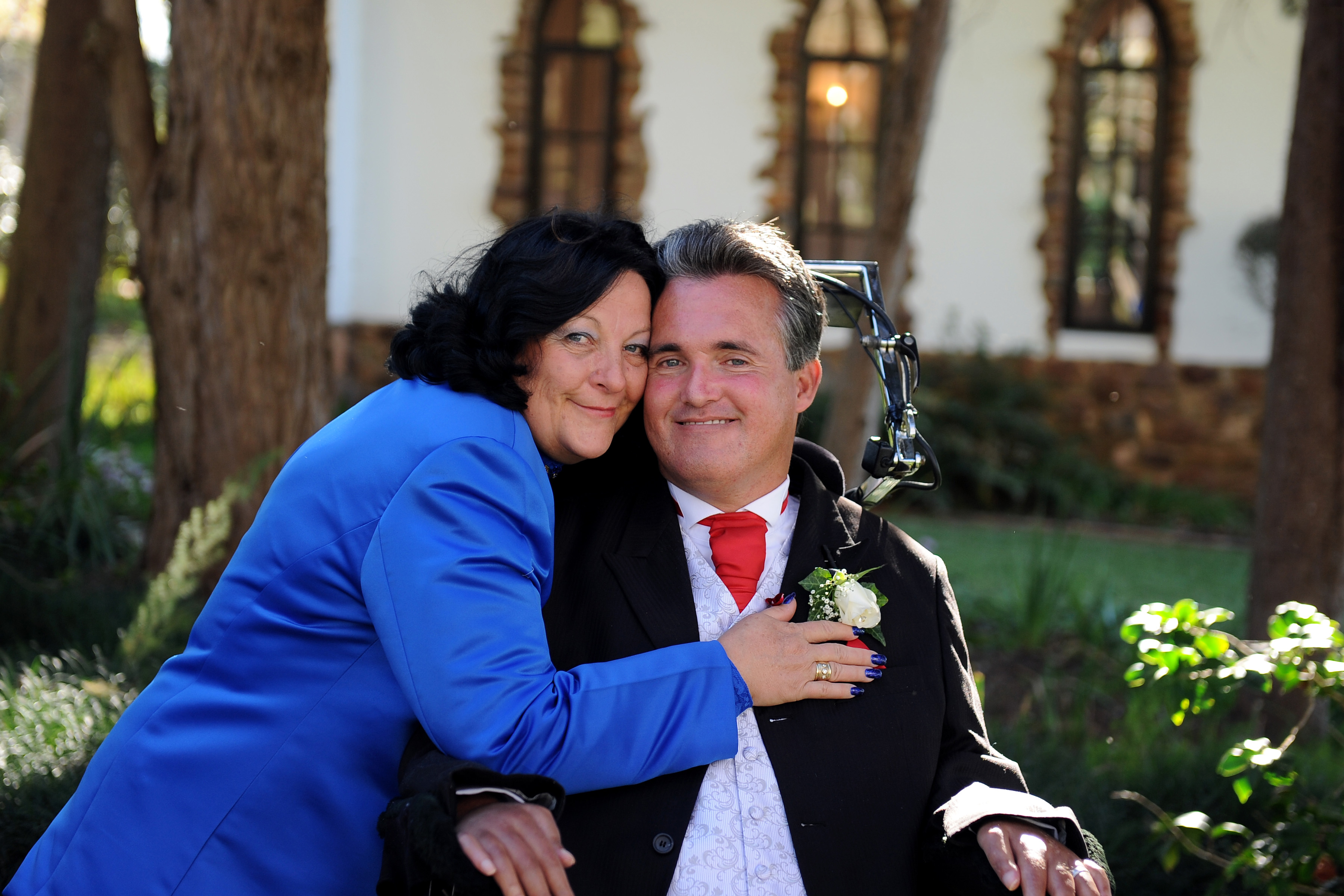 Louise Steyn, 67, underwent a life-changing hip replacement in November 2017, after two years of constant pain and a fruitless search for relief.

She doesn't use the expression life-changing lightly. She juggled the operation in between caring for her multi-talented quadriplegic paramedic son Martin. She's been selflessly caring for him for 21 years. "I am so grateful finally being relieved of the constant pain of a grinding hip that saw me taking up to 15 pain tablets a day," she says. "At last I can sleep without pain. Before the operation at the Life Fourways Hospital, I was using a crutch and then a walker to get around. Two medical aids either turned me down or wanted a year-long waiting period because they said the bone degradation was wear and tear. "I offered to jump off the roof, but they didn't like the idea," she says, with typical dry humour, of the medical aids that turned her down.

I was a league squash player in my youth, which probably had something to do with my condition," she adds. She says it took her son Martin, just 15 minutes on the phone to Discovery Health Medical Scheme in May 2017, to get her onto his medical plan with the scheme.

"An angel called Lerato at Discovery Health Medical Scheme took down all the details and then told me I could go for an operation in three months' time. I just love Discovery Health Medical Scheme. I can't tell you how great I think they are. They saved my life, I could not have gone on like that. It wasn't worth living anymore. I had no quality of life, hopping around in pain for two years and trying to help my son," she says.

During her hip-replacement surgery on November 22nd, 2017, her femur broke and the resulting surgical course-correction turned a two-hour hip-replacement procedure into an ultimately successful six-hour marathon. She handled it with aplomb, having faced her share of adversity and challenges.

On Boxing Day 1997, Martin, then 26, dived off a jetty at the Vaal River into a submerged sandbank and broke his neck, leaving him paralyzed from the neck down. Louise offered to care for him on a permanent basis.
Martin, who was studying emergency response and trauma care at the time of his paralysis, is described by Louise as, "a bit of an adrenalin freak."

He refused to let his disability get in the way of his ambitions, importing a "four by four" wheelchair from Australia, which enables him to access beaches, travel up 45-degree slopes on nature walks and easily negotiate muddy patches.
Having qualified as a fitter and turner, he used a computer programme (manoeuvring through it with a stick-like device used in the mouth, linked to his computer), to design an improved South African version of the quad-bike-like wheelchair.

Today either Louise or his partner in business - Albert Seko - drives him almost daily to his wheelchair factory which manufactures the custom built "four by four" wheelchairs, tailored to each customer's needs. "He drives his wheelchair up a ramp into his specially adapted van," says Louise proudly.

When he's not running his Radical Mobility company and factory, Martin tours the Gauteng motivational speaking circuit, where he's a popular presenter at schools, and speaker at corporate events. Louise, a former legal secretary, says she's adapted their large free-standing house to cater for him.

By the end of March 2018, Louise was mobile - using a walker as her hip healed. "I am confident that my surgeon's prediction of a healed femur by the end of May, is correct," she says.

"I want to thank Discovery Health Medical Scheme from the bottom of my heart for supporting me so well during my hip replacement surgery! I am at last free of the horrible toothache in my hip! You are the bestest! Your service was excellent and Life Fourways Hospital treated me like a queen. Everything was just wonderful and I had the best orthopaedic surgeon in the world, my Dr Lipalo Mokete. Nobody said this would be easy but it's definitely do-able," she adds with an attitude matching that of her son's.

You are young and healthy. Why do you need medical aid?

Everyone needs some form of medical aid cover. Few of us could afford the costs of long hospital stays or care for serious injuries, surgery, or chronic illnesses - for example, it costs R8 500 a night for a premature baby to stay in a private hospital's neonatal unit (some stay for five months), and that's just the bed, without any consultations, medicine or medical supplies. Medical schemes help us finance life's curved balls when we can't do it alone.

Get a medical aid quote today!

Brian Anderson, is a minor walking miracle. He's had 93 operations, including two kidney transplants and been on intermittent dialysis for 22 years. He's passionate about raising awareness around Chronic Kidney Disease and organ donation.

How you can have kidney disease and not know it

Kidney disease has largely indistinct symptoms, which means that most people have no idea they’re headed for renal failure. Here’s how to find out if you’re at high risk, and what to do about it.

Amy Rabie gets her mojo back after Type 1 Diabetes diagnosis

Driven by her high-pressure job, Amy Rabie, 24, believed long hours were the cause of her tiredness, headaches, constant thirst and blurry vision. Little did she expect she had life-threatening Type 1 diabetes.