Retirement and tax - what you need to know

Tax is certain, and there’s no avoiding it

While you need to consider the impact of tax when planning your retirement savings strategy, it shouldn’t be your primary concern. That said, it needs to be factored in both while saving for retirement, and during retirement, given the different tax treatment of those two scenarios.

Broadly speaking, the taxation process can be summed up as “exempt-exempt-tax”, consistent with regulations in many countries globally. You are exempt from tax on contributions made while saving for retirement (up to certain limits), and you are exempt from gains on the investments while you are saving, but you are subject to income tax upon retirement as you draw down your savings.

The key retirement-savings vehicles are retirement annuities and pension or provident funds. The main difference between these products is that the latter are employer-provided and are typically mandated in most large businesses. Retirement annuities are typically used by self-employed individuals, employees in organisations that don’t offer a pension or provident fund, and those who want to increase their retirement savings.

The main benefits of retirement annuities are that you are able to contribute to as many of them as you wish, you can stop contributing whenever you want, and they are transferable. There is additional flexibility in that lump-sum retirement annuities are available. This is a tax-efficient way to house any excess savings, as you are able to use the lump-sum amount to reduce your income tax liability in that year.

In short, the act ensures that the tax benefits of contributions to provident funds, pension funds and retirement annuities are now on an equal footing.

It is also important to note that most people currently saving for retirement will be unaffected or better off under the changes. High-income earners are likely to be the most affected by the changes.

How the act affects you: Before retirement

The tax deduction increases from 15% to 27.5% of income, up to a maximum of R350 000 annually, on contributions made towards structured retirement savings. It now applies across the board, in other words, to provident funds, pension funds and retirement annuities.

The distinction between retirement funding and non-retirement funding income has also been removed. That means all clients who were members of a pension or provident fund, and therefore unable to take out a retirement annuity, can now top-up to the limit of 27.5%.

Also, only employees are able to claim contributions, regardless of whether they actually made them (companies will often contribute to a pension).

How the act affects you: After retirement

The laws mean that the rules that governed provident funds changed to the same as those that governed pension funds. Provident fund members can only withdraw one-third of those savings at retirement, and they are required to purchase an annuity with the remaining two-thirds.

Effectively, one could argue that the government is looking to help protect retirees by enforcing compulsory preservation and making it impossible for hard-earned savings to be withdrawn in a lump sum. 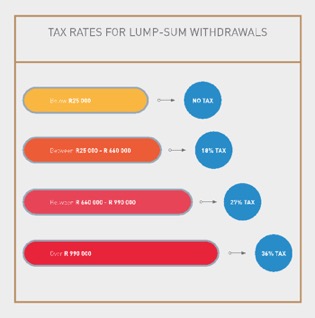 There are some important exceptions to the rules surrounding lump-sum amounts and the purchase of annuities:

How is your annuity taxed?

The remaining two-thirds of your savings received in the form of an annuity (pension) is taxable. But this would only be for the amounts that exceed certain thresholds published by the South African Revenue Service. For the current tax year (to end-February 2018), these thresholds are:

The act does not affect what happens if you leave a provident (or pension) fund before retirement, either because of changing jobs, retrenchment or dismissal.

Also, the withdrawal of the entire amount of a pension or provident fund is still possible before retirement, although this is very ill-advised. (For retirement annuities, withdrawals are only possible on early retirement due to ill-health or on emigration.)

Tax-free savings accounts allow the investment of R30 000 a year (up to a lifetime limit of R500 000, likely to be revised upward in future). These investments can be made in a number of different asset classes and all gains on these investments (capital gains, dividends and interest) are completely tax-free.

However, contributions are not tax-deductible, which is why tax-free savings accounts should only be considered as a way to supplement whatever retirement savings an individual already has, especially if they are at (or near) the contribution limit of 27.5% of taxable income.

With so many complex factors to consider and a very long time horizon, it is important to get professional investment advice for your retirement savings, as well as the tax impact of choices you will need to make.

Get the right help to ensure you reach your savings goals

Investment decisions are important and should not be made without expert financial advice. The right financial adviser will help you make the most appropriate investment choices for your future.

Find an accredited financial adviser who will guide you on your savings and investment journey.

Request a call back

Discovery Invest: Get rewarded for saving towards your retirement

Find out more right here about the different ways you can invest through Discovery Invest, either local or offshore.

Take a look at the different fund types, their risks and rewards, their costs, and how they have performed over the years.

Retirement and tax – what you need to know: Part 1

Life cover that allows you to get a substantial portion of your premiums back by encouraging and helping you to get healthy and stay healthy lets you benefit while you are still alive. Here is how Benna Koorsten boosted his retirement savings by R2.7 million.

Are you financially prepared for living longer?

We have all heard "50 is the new 40". It may be truer than you think. The world over people are living longer. Although longevity is a positive, financial behaviour combined with other knock-on effects of a longer life have to be considered.