Conquering poverty to save kids with cancer

Yet if Polokwane (Pietersburg) Hospital’s Dr Vhutshilo Netshituni had a magic wand, she’d use it to conjure up universal awareness of early warning signs of childhood cancer in Limpopo’s mostly rural communities.

At her hospital, housing the province’s only paediatric oncology department, the childhood cancer survival rate between 2015 and 2018 was a heart-breaking 35%. She’s acutely, very often tearfully, aware of the value of early cancer detection. The 37-year-old (in 2018) also often counsels and consoles the distraught parents of late-presenting patients. 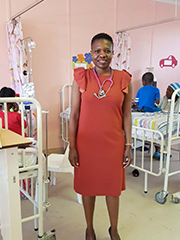 “Unlike cancer in adults, with children there’s very little specific screening you can do, perhaps with the exception of retinoblastoma – a cancer of the eyes, which can be genetic. Most of our kids present so late there’s little chance of saving them. So, education and awareness are crucial to early detection,” she reports.

Dr Netshituni says what makes detection even harder is that most paediatric cancers are asymptomatic early on. This requires healthcare worker and community education to enable diagnostic tests when persistent maladies present. These maladies may be cancer-linked but this is not always apparent to care-givers.

She gives the example of a bladder Rhabdomyosarcoma, or cancer of the bladder, which can exhibit a bewildering range of non-specific symptoms. These include constipation, abdominal pain, swelling, discomfort, nausea and vomiting and loss of appetite. Another example is when a child has fever, cough and unresolved swollen glands under their chin, neck or armpit which can be mistaken for tuberculosis, when lymphoma is actually a possible underlying cause. Both can present with the same symptoms.

Bone cancer strongly illustrates her detection-difficulty point; “A child arrives at an outlying clinic complaining of leg pain. They do an X-ray and see nothing, just mild swelling. They give pain medication. The child is sent home but soon returns with an infection which is treated with antibiotics. By the third visit the leg has swollen to twice its normal size. By then the cancer has spread from the bone to the lungs. A child with only bone cancer has about a 60% chance of survival. If there’s a lung metastasis this drops to about 20 or 30%. I’ve seen legs amputated, followed by chemotherapy but because of the lung metastasis, the child eventually dies,” she adds.

Continuity of care is vital

Moving to the healthcare system itself, she says a lack of continuity of care can pose an additional life-threatening risk as patients fall between treatment gaps. “You can’t guarantee the child will be seen by the same doctor, or even at the same hospital. Due to long waiting lists for CT scans, the hospital which the child is referred to gives them a date two or three months down the line - by which time the tumour has tripled in size and is inoperable.

Dr Netshituni says that laying down the building blocks for parents to better understand their child’s condition is vital. “You need to be very patient. It’s difficult for parents to accept that there’s nothing you can do for their child. Parents are often in denial regarding the condition and the treatment plan, which is understandable. It‘s important to establish a support structure for the family and the patient,” she adds.

Coping with tragedy, all in a day’s work

Another consultant, registrar and medical officers help her handle her constantly-full, 30-bed paediatric oncology unit. Asked how she handles the emotional stress related to caring for sick children, Dr Netshituni confesses: “On a day to day basis, I don’t know how I do it. I cry a whole lot, but I do involve myself in outside activities. Recently I holidayed in Italy. I have play dates with my six-year old son and attend church regularly.”

Born in Tshilapfene Village in Thohoyandou, Dr Netshituni and her three siblings lost their father early in their lives. Her mother, Sophie, saved up to be able to afford the R4 000 for her registration at the then Medunsa Medical School (now the Sefako Makgatho Health Sciences University). “Her saving got me a room and for the first half of the year I could eat something from the cafeteria, using some of that money. Then we signed an agreement to pay in R200 per month, but went into arrears. Luckily for me the Limpopo Department of Health’s Bursary Office began helping low income students and visited my home to verify our situation. I’d already bought all my study books second hand, so I was able to use some of that bursary money to eat at the cafeteria for an entire year. I used the rest of the money to pay off my first-year debt,” she enthuses.

It took some doing but today, as the first black paediatric oncologist in South Africa, she’s a trail blazer and an inspiration to young women everywhere.

Colorectal cancer – a simple test can save your life

Surgical gastroenterologist, Dr Dean Lutrin, shares fascinating insight into colorectal cancer – which can occur in fit, healthy people who are asymptomatic in the early stages.

Dr Evelyn Moshokoa is quiet and humble. The 46-year-old head of the Urology Department at the University of Pretoria and Chief Urologist at Steve Biko Academic Hospital is also South Africa’s first black female urologist.