Deirdre Larkin first hit the road in 2009, and now, at 88 years old, is getting stronger and keener by the year. We caught up with 'Randburg's Grand Dame' this #WomensMonth to learn how her passion for running gave her a new lease on life.

Deirdre Larkin is no average octogenarian. She's accumulated over 500 running medals over the last eight years, and currently holds the half marathon world record in the 85+ age category. A mother of four, grandmother of five, and regular celeb at local racing events, she's appeared on televised news magazine show Carte Blanche, international news snippets and graced the cover of Modern Athlete. All in all, not too shabby for someone who first started running at the age of 78!

A former concert pianist, Deirdre is living proof that it's never too late to start getting active - and compelling new research shows just how much good it can do you. A recent paper titled Running as a Key Lifestyle Medicine for Longevity indicates that runners have a 30% - 50% reduced risk of cancer-related mortality, and a 45% - 70% lower risk of cardiovascular-related mortality, compared to non-runners. We chatted to Deirdre on how staying active keeps her healthy and gives her vigour.

Discovery: Research shows that runners live about three years longer than non-runners. Runners also tend to engage in other healthy behaviours that contribute to their increased longevity. Can you attest to this?

Deirdre: I found running after three years of looking for some exercise to prevent my osteoporosis developing further. I went to a dietician and she helped me with my vegetarian diet, and suggested exercise. I was never sporty at school, so I tried yoga, Pilates, gym, and so on, but I was not interested. Then I discovered The Fitness League. They offer one-hour classes to music, and exercise every part of one's body, but not too strenuously. I still do the classes every week. Then, when I was 78, I tried running, which my youngest son suggested, and my enthusiasm for it grew. The more I did it, the more I enjoyed it.

Are you on osteoporosis meds now or have you given them up completely?

I am not on any kind of medication.

There's also evidence that running can help prevent neurological conditions such as Alzheimer's and Parkinson's disease. How has staying active improved your health?

Running makes me feel excited and happy. It takes me several hours after a 10 or 21 km race to recover from a most enjoyable 'Runner's High'. I?m not aware of the onset of Alzheimer's or any other disease ? as of yet! And in the last 19 years I have only visited my doctor for relief from the flu and broken arm. I go annually for check-ups and X-rays, but all seems ok so far.

Studies show that running participation declines 5% - 10% each decade, and less than 2% of people continue to run past 65 years of age. Many older people feel they need to 'slow down' as they age, but you sound like you stay busy, what is it that keeps you going?

I like exploring new opportunities. I was a member of a piano trio for 16 years and we provided live music for weddings and functions, which meant an exciting adventure every weekend. Running races has a similar appeal to me. My day now is divided into firstly running in the mornings and teaching pianoforte at St Peter's College in the afternoons.

I run five days a week, two of which are usually races. But first I always do about 45 minutes of strength and flexibility training to warm up before my morning run. I always do exercises to strengthen my back because, when I was 39, doctors discovered I was born minus a vertebra. Having had two children by then, my back was out of shape. I had a spinal fusion with a piece from my hip being inserted into my spine. Afterwards, I took a long time to recover and could not even lift a teacup for three months. But the operation was a great success. I've had no back problems since.

That's incredible! So, what encouragement would you give to someone who thinks they're too old or frail to run?

There is a saying that goes, "Use it or lose it." It is so very true. If one does not move one's body, one's limbs become stiff and brittle, hence liable to break. Keeping moving is vital to life. Frequent gentle movements are a good start for exercising, doing a little at a time. After a few weeks it is exciting to discover how much one has improved.

Some people suddenly start exercising and do too much, too soon. I frequently hear people saying "I can't do ..." To me this seems as though they have never even tried gently to "do". I believe, unless of course you have a permanent injury, that one can manage to do anything that you REALLY would like to do at whatever age. Most people who consider themselves "frail" or "too old" seem to be using that as an excuse in order to avoid "doing".

It is not necessary to go to gym classes or find a means of vigorous exercising to keep moving. Things like going for a walk, using stairs instead of lifts or escalators, carrying one's shopping (if it is not too heavy), simple movements such as leaning from side to side, turning one's upper body, moving one's neck, rising from one's chair without using one's arms, shrugging one's shoulders ? all these can help to the body wake up. One is never "too old" to learn new skills.

What qualities do you think are key in this pursuit?

I think it is important as one grows older to find any kind of activity that interests one and that one can develop into a greater skill. Enthusiasm and perseverance in spite of obstacles are necessary. My life was always concerned with playing the piano and giving concerts, and this activity helped me to develop these two qualities.

Do you think about anything in specific while you run?

I like to concentrate on my stride, my posture, my effort, my hips, my arms and my balance. I also like to admire the scenery, especially the races around Irene, Hartbeespoort and Cape Town. Since my appearances on television in 2017, many people recognise and now chat to me as they're passing. I enjoy this diversion - and it makes me run quicker too!

What's coming up on your racing calendar?

The delight of this year is that my 51-year-old daughter has become very keen on running. It is such fun to go to local races together over the weekend. My immediate plans are just keeping up with races around Gauteng. I really enjoy the ones in Pretoria as they stimulate the elderly to run by giving category prizes to the 70+ and 80+ (not just 60+). These rewards urge one on to do better and go faster. Next year I hope to run my 9th Two Oceans Half Marathon - I'm aiming for the Blue Card for 10 races. 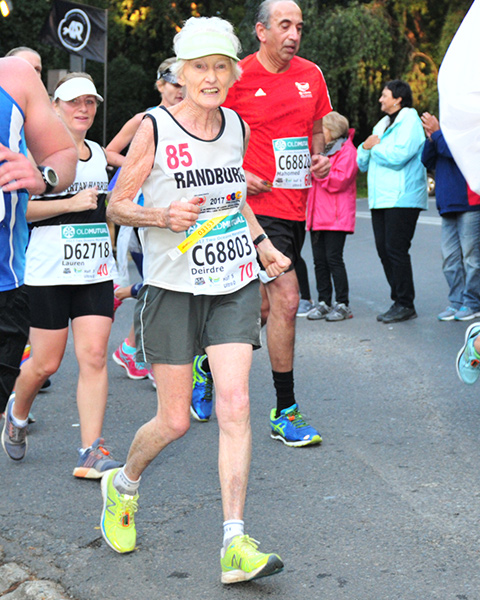 "There is a saying that goes, "Use it or lose it." It is so very true. If one does not move one's body, one's limbs become stiff and brittle."

Enjoy getting active in a variety of ways with Vitality

Did you know that people of all ages and fitness levels can participate in a Walk, run, cycle, swim, golf, race ... Vitality offers you many ways to get fit. Join a health club, link a fitness device to track your activity, take part in race events and join Team Vitality, our running and cycling club. Like to hit the gym? Save up to 75% on your monthly gym fees, or head outdoor and earn points for walks and runs.

Are you running enthusiast, or keen to become one?

Team Vitality is South Africa's most popular running and cycling club, and it can help you get fit, save money and connect with like-minded people. Join Team Vitality and get 50% cash back on registration entry fees for selected events.

You'll also receive a great Team Vitality starter pack with race gear and vouchers worth over R1 000. Plus you'll have access to our VIP hospitality at certain events on the Team Vitality race calendar!

Get into gear by signing up today.

Replace those resolutions! (with small, effective habits that last)

How many times have you made a New Year's resolution to "get healthy" that didn't last a month? Don't worry, we're not judging. Fact is - it's pretty tough to stick to resolutions. And according to behavioural economists, it takes a lot more than sheer willpower.

How to become a morning exercise person

You don't have to catch worms to enjoy the merits of being an early bird. Exercising in the mornings has many advantages, so it's worth rearranging your daily schedule to fit it in. Here's why and how to give it a go.

Get ready to run - a beginner's guide

Busy? We understand. Haven't exercised in a while? Don't worry ? starting running (and sticking with it) is easier than you think. But first things first: you need to get your body and your mind prepared for running.