When baby Simoné Scott let out her first cry at birth, her parents’ relief was indescribable. A pacemaker could now be inserted into her body, ending a 10 week wait during which time she could have had a heart attack at any moment, while still inside her mom.

Baby Simoné Scott was born on 18 December 2018. The moment of her birth – via C section – was one of intense relief for her parents. Their 30 week foetal scan had revealed that Simoné had an irregularity in her heart, later confirmed by a foetal specialist to be an atrioventricular (AV) block in which there is interference in the transfer of the electrical nerve impulses that regulate the normal, rhythmic pumping action of the heart muscle.

Simoné’s condition was possibly caused by an undiagnosed autoimmune disease. Says mom Natashia (aged 32): “Blood tests at the time showed signs of lupus.” Systemic lupus erythematosus (or lupus) is a condition in which a person’s immune system begins to mistake the body’s own tissues as threats and attacks them; in this case possibly passing from mom Natashia to baby Simoné’s heart tissue. 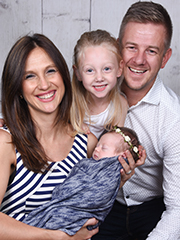 Rudi and Natashia Scott with their daughters, baby Simoné and Mieke

A heart has four chambers: two upper atria and two lower ventricles. The right atrium contains a pacesetter called a sinoatrial node (SA), which initiates and controls the heartbeat through electrical signals that travel from this node to the ventricles along conducting tissue known as the atrioventricular (AV) node. Normal transmission creates a normal heart beat. Anything that blocks transmission causes a ‘heart block’ or an ‘AV block’, and in Simoné’s case, a congenital heart block as this occurs in a foetus or newborn.

“I had to carry Simoné to term – for 10 more weeks – so a pacemaker could be inserted into her heart to replace the faulty AV node and regulate her heart rate for life,” recalls Natashia. “We were also made aware that she could go into cardiac arrest any time between 30 weeks and birth.”

Natashia and her 33 year old husband Rudi Scott live in Johannesburg and are also parents to 4 year old Mieke. Natashia hadn’t had an easy pregnancy with her first 26 weeks characterised by the nose and gum bleeds common to pregnant women. “At 26 weeks things seemed to settle and for four weeks I felt great. I had my glow,” says Natashia. “Then came the 30 week scan and we were left with a feeling of overwhelming shock. We went to see the foetal specialist with such a positive outlook, expecting to hear nothing was wrong; we’d had a false alarm at our gynaecologist, but Simoné’s heartbeat then was only 53 beats per minute while it should have been between 120 and 160 beats per minute. The AV block was confirmed. There are no words to describe the emotions we went through – distress, fear, anxiety, panic. Rudi and I fell back on our Christian faith and that really got us through.”

Rudi recalls, “the foetal specialist told us that the only thing we could monitor between consultations was the baby’s movement.” Natashia adds, “every morning I waited to feel kicks or small flutters, to know that she was okay. And, to keep myself distracted I focused on work.” Natashia is a clinical social worker in the field of rehabilitation of drug and alcohol addicts. “I limited my stressors and took on only known, stable patients.”

Four weeks before her due date, Natashia was put on a course of steroids as Simoné was not growing adequately. “This helped to take her from 2 kg to 2.55 kg,” explains Rudi. “She had to be close to 2.7 kg at birth in order to receive the pacemaker.”

The couple was referred to a paediatric cardiologist at the centre of excellence in paediatrics at the Netcare Sunninghill Hospital and also saw a new gynaecologist who specialises in high risk cases. “This all meant a wave of interaction was needed with Discovery Health Medical Scheme (DHMS) as we had previously been with a gynae at a hospital on the West Rand, fully covered through our Delta Saver Plan, but our new hospital and service providers were not fully covered.” The Scotts called the Discovery Health call centre, and Kevin MacKay answered.

Discovery Health’s Kevin MacKay, a pillar of strength for the Scott family

Kevin MacKay is a Discovery Health service agent. Rudi explains: “Kevin explained the process we would need to follow and that he would need letters of motivation from all the specialists treating Simoné to allow DHMS to consider waiving all the co-payments we would have had to incur for not using the Delta Network. Two days after sending these, he let us know that DHMS would waive the co-payments amounting to R15 300.” Rudi later posted this message on Facebook about the experience and support the family received from DHMS. 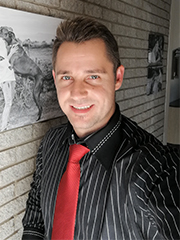 At 38 weeks of pregnancy, on 18 December 2018, Natashia gave birth to Simoné, who was immediately whisked to neonatal ICU for monitoring and operated on three hours later. Natashia remained in theatre as her placenta had torn and doctors needed to stem the bleeding. Simoné’s pacemaker (an adult sized device was the only available option) was inserted into her abdomen, rather than under her collarbone where it is traditionally inserted, as there was very little room there for it there. Simoné remained in ICU for 10 days.

Kevin adds, “I spoke to Mrs Scott on 21 December and I felt such joy knowing that the operation was a success. I got so much credit from Mr and Mrs Scott, simply for doing my job. The most important thing in my work is putting myself into a member’s shoes, and following up with them to prevent the frustration members feel calling in and speaking to different agents about sensitive matters. I believe God allowed our paths to cross as I have learnt so much from their strength as a family.”

Four months on, at the time of writing in April 2019, Simoné was doing very well. Her development was normal, her weight was 6 kg and Natashia was breastfeeding her little girl normally. Her pacemaker will be ‘re-paced’ at age four or five to lower her heart rate in line with what it should be at that age, and to replace its battery pack. When she turns 18, her pacemaker will be moved to her collar bone area and not only pace the AV node but also the top SA node.

“We believe God was always in control and are so grateful for every moment with our baby girl,” adds Natashia. “Looking at her, you wouldn’t imagine she has a heart condition,” says Natashia, “and her doctors are very happy with her progress.”

How will these rising tech trends affect your health?

As the new year dawns, ground-breaking technologies are empowering consumers and healthcare systems at an unprecedented rate. Here are three healthcare trends that are fast gaining traction, and how they can affect you.

Although Melissa Platt lost her young son to sepsis, she still likes to be known as “Sam’s mom.” She’s determined to spare other parents her pain by sharing learnings from her remarkable experience and sharing Sam’s legacy.

How to keep your heart healthy