Although Melissa Platt lost her young son to sepsis, she still likes to be known as “Sam’s mom.” She’s determined to spare other parents her pain by sharing learnings from her remarkable experience and sharing Sam’s legacy.

Melissa Platt gazes nervously over the full conference room she’s about to present to, and takes a deep breath. Then, she walks barefoot across the carpet, faces the industry professionals, mostly doctors, who have gathered to learn about improving safety and outcomes in healthcare, and asks each delegate to remove their own shoes.

It’s a symbolic gesture. “Take off your professional titles,” she often tells audiences at medical conferences or classes where she shares her insights. “Engage with what I’m about to say not as a health professional, but as a mom, a dad, a son, a daughter or sibling. Because when you do that, you’ll see your patient as not just a physical body, a pair of lungs, the cancer, the sepsis – but as a human – viable, unique, deserving of respect and quality of life.” 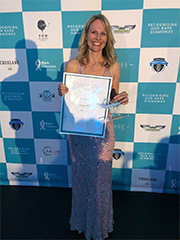 Melissa was awarded a Rare Diamond Tribute Award by Rare Diseases South Africa in recognition of how she’s helping to advance excellence in healthcare within the rare diseases community.

Melissa and her husband Fred, both Discovery Health Medical Scheme members, founded the Footprints 4 Sam Trust in memory of their son, who was born on 9 April 2015 with central core disease, a non-degenerative, rare muscle myopathy. Sam spent all of his life in Intensive Care Units, and eventually passed away from a sudden onset of sepsis, caused by three hospital-induced superbugs - burkholderia, klebisella and pseudomonas.

“When a child is in ICU for a long time, and on a ventilator, the nosocomial infection rate is compounded due to the risk of ventilator-acquired pneumonia,” explains Melissa. “Sam was on last-in-line antibiotic Colistin and once he got sepsis there was nothing more that doctors could use to treat him.” Ultimately, this ordeal spurred her on to complete a Postgraduate Diploma in Palliative Medicine (completed cum laude) and Melissa now works as a palliative coach and a professional consultant, focused on the paediatric healthcare sector. She adds: “We are passionate about getting children out of ICU as soon as possible, due to the compounded risk of infections.”

During Sam’s short 15.5 months on earth, he was exposed to both the good and the bad of the healthcare system, enduring multiple botched procedures and misdiagnoses. What struck Melissa were the deep feelings of powerlessness and disillusionment at the lack of humanity Sam was sometimes subjected to. She’d hear him being referred to as “the host” or “Bed 4”. After 13.5 months, his parents moved him to another hospital and for the first time, they felt like their opinions mattered.

“Throughout Sam’s hospital journey, Discovery Health Medical Scheme never quibbled over any bills and were very helpful and professional. We were extremely grateful they approved the transfer from Johannesburg to Cape Town, because that gave us two months of seeing Sam freed from tubes and being treated like a human being. He was able to move and eat and explore the world like a normal little boy. That was a precious time for us.” His progress after this was rapid, but sadly, it was just too little, too late.

Remembering the person behind the patient

“I think that, throughout the world, medicine is in a state of crisis,” Melissa says. “There’s a level of disassociation which has, in part, led to increased medical legal risk. In today’s overburdened industry, sadly a veil comes to surround medical experts, over time, so that they can protect themselves from the stress of their work. But, this can result in forgetting the person behind the patient – especially when that patient is a child.”

“We were heartbroken about the disconnect we’d experienced. But we decided not to take legal action. We decided instead to focus on helping to prevent our experience from happening to other families.” About three months after Sam died, Melissa was asked to speak at a Rare Diseases conference on quality of life from a parent’s perspective. “As I described what was missing from our care journey, someone said, hang on, that’s palliative care. And I thought, what is that?!”

She learnt that palliative care isn’t just for terminally ill or geriatric patients, but the principles are fundamental to treating all patients holistically and with compassion. Desperate to become part of the solution, Melissa signed up for a post-grad Diploma in Palliative Medicine – the only one of its kind in South Africa. 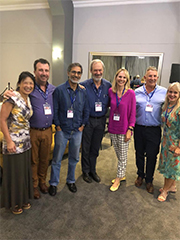 Melissa at the 2018 Risky Business conference alongside leaders in the paediatric field, including Prof. Ashraf Coovadia, Prof. Andrew Argent and Prof. Mignon McCulloch.

To do their job properly, everyone needs to be cared for

“I was one of just three non-health professionals in the class, but as a class, we learnt so much from each other! As a bereaved parent, the doctors could ask me hard questions and get honest answers, and I could also see things from their perspective and realise the challenges that we’re all faced with. And, at the same time, to handle challenges with mutual respect, empathy and kindness.”

“I understand how patients can become numbers when you’re continuously stressed and overworked. So it’s important to check - are doctors being cared for themselves? Do they have regular debriefings and multidisciplinary teams? Are they burnt out? Do they have compassion fatigue - which is what we experienced? Everyone needs to make sure they are cared for holistically to do their job properly, and ultimately to look after the patient holistically.”

“My message to doctors is that it’s okay to say, ‘I don’t know.’ Recognising when to pass the baton in a care journey can save a life. There’s an ongoing relationship you have with the treating doctors – and good communication is key. Many doctors I’ve since met have told me that they don’t get enough training in basic communication, and they can struggle to break bad news. I’ve sat with distraught parents who say, ‘There were five doctors looking after my child over five years, and when he died, only one phoned. All I needed was to hear some kindness’,” she says.

One might think doctors would react defensively to this – but wonderfully, Melissa has experienced just the opposite. She’ll never forget the reception she once received after a talk at a critical care conference. “It just so happened to be a year to the day that Sam died, and I decided to share a very personal poem about my grief.” When she had finished, there was a long, weighty silence as everyone absorbed the words.

“Afterwards, one of the organisers came up to me. She said, “Melissa, today, you made grown men cry. You connected with your audience – and made them connect with the people they’re caring for. It’s such a stark reminder of what we often forget.”

“That, for me, was really moving,” says Melissa, “and we’ve had that kind of response time and time again. It’s been mind-blowing how doctors and medical students and professors across the country have said, ‘We just want to hear Sam’s story. We want to hear how to do things better.’ That’s been so encouraging. And that’s why we keep doing it. We’re trying our best to help put the human back into healthcare.”

Sam and his dad Fred, who went on to write a book about the experience and his loss

Footprints4Sam aims to leave footprints of change in neonatal and paediatric ICU wards countrywide by cultivating a healthcare culture of swift and broad-based intervention, early diagnosis and achievable family-centred solutions, which promote excellence of life for both child and family. Find out more here.

Sam’s father, Fred Platt has also documented his experiences in a book called ‘Lessons from a Rainbow Unicorn: A real life story of a father's loss.’ Sam’s story is also making a lasting impact: practical guidelines for healthcare practitioners titled ‘Sam’s Lessons’ is now being published as a chapter in the Oxford Textbook of Palliative Care for Children.

Discovery Health Medical Scheme offers members on all plans the opportunity to get an online second opinion from a physician specialist at the Cleveland Clinic, a medical centre in the United States which is recognised worldwide as a leader in healthcare.

The Cleveland Clinic MyConsult® service offers online medical second opinions for more than 1 200 diagnoses, including conditions that impact a person’s quality of life, or more serious life-threatening conditions. It aims to provide confirmation of the diagnosis and treatment recommendations.

A new generation of healthcare professionals

Discovery and the Umthombo Youth Development Foundation are empowering youth from rural areas to pursue a qualification in healthcare and give back to their communities.

Click here to watch Umthombo graduates share about their experience and the incredible impact it’s making in improving the country’s shortage of healthcare professionals.

How will these rising tech trends affect your health?

As the new year dawns, ground-breaking technologies are empowering consumers and healthcare systems at an unprecedented rate. Here are three healthcare trends that are fast gaining traction, and how they can affect you.

Want to protect your kids online? Train them to be cyber-savvy

As more kids have access to one or more screens and Internet-connected devices – and with it comes dangers to your children’s wellbeing. Here’s what to look out for and how to help your kids thrive in the digital age.