De-dollarisation | A world no longer dominated by the US dollar

The US dollar has dominated global trade for decades, with the euro a close second. The dollar is likely to play a central role for some time to come, but structural trends are starting to decrease its importance.

De-dollarisation – reducing the dollar’s dominance of global markets – is an inevitable trend that investors should be watching, since the emergence of a multicurrency world will have a big impact on markets and will affect nearly every asset class.

The following graphic shows how important the dollar currently is in global financial transactions: 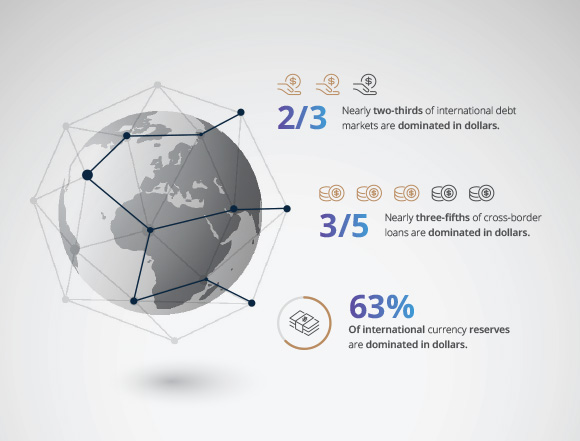 Many market participants agree that that any shift in the monetary order away from the US dollar will happen gradually and take decades. This is understandable after six of the last seven years in which the dollar has risen against other currencies. Past currency transitions have taken decades, so the general view is so will this one.

However, unlike the general view, we believe that several factors indicate de-dollarisation will pick up momentum over the next few years. These factors include geopolitical tensions, the growth of intra-Asian trade, increased borrowing by China and the changing role of the US in global oil markets.

2018 was potentially a watershed year during which countries in the path of US sanctions, like Russia, Iran, and China, began to accelerate ways to protect themselves from the consequences of using the dollar.

At the same time, emerging Asian economies started looking for ways to reduce the boom-and-bust cycle associated with its tie-in to the US dollar. For instance, a 10% US dollar appreciation takes about 1.5 percentage points off GDP growth in emerging market economies. The opportunity to reduce dollar exposure will grow as trade in Asia becomes less dependent on the US. These countries may start preferring to conduct trade in the renminbi, which increasingly reflects their trade patterns.

One factor driving de-dollarisation includes the ageing Chinese population. China’s working age population peaked in 2016 and will decline going forward. This is important because half the increase in Chinese household savings since the 1970s was driven by demographics.

The ageing population results in consumers spending more than they earn as they start using their savings to support their retirement. Until now, China’s saving rate has been the highest in the world, touching 45.7% of GDP in December 2018. The withdrawal from household savings will put pressure on the country’s current account. As China’s current account shortfalls become more frequent, it may have to run down foreign assets or borrow more from abroad to pay for its consumption. China would prefer to borrow in renminbi, rather than dollars.

The country has also recently taken various steps to internationalise the renminbi. These steps include the Belt and Road initiative, a massive infrastructure programme to stimulate trade between Asia, Europe and Africa through the development of six regional transport corridors.

The following graph illustrates how China’s economy is moving from being a net exporter towards one with increasing dependence on imports:

Another recent development is the shale gas revolution in the US. By 2025, America is set to overtake Saudi Arabia as the world’s biggest oil exporter. Effectively, the US is buying less international crude oil at precisely the same time the Chinese are buying more, increasing the opportunity for oil exporters to accept other currencies. China, as the world’s largest importer of oil, would likely prefer to pay in renminbi.

A weakening dollar normally accelerates the adoption of other currencies. After strengthening for six of the last seven years, the US dollar is expected to weaken from this year, driven by a combination of fiscal and current account deficits arising from tax cuts and higher social spending. To maintain growth, the US Federal Reserve is widely expected to start cutting rates this year.

How could the transition to other currencies play out?

There is a lot of uncertainty about a currency transition, and we believe there are several possible scenarios.

One possible scenario is full internationalisation of the renminbi over the next decade. This would see China open its capital account and fully integrate with the global financial system. It would greatly increase global liquidity because Chinese savers would be able to diversify into international assets. It would also allow international investors greater opportunities to invest in China.

Another possible scenario is that other countries will increasingly reduce their use of the dollar in trade and invoicing, which would have a negative impact on global liquidity. This would increase US funding costs, expose the US to more external economic shocks and reduce the country’s influence on the world stage, all of which would ultimately lower US living standards. But it could benefit gold and other safe-haven currencies.

The most likely scenario: Growing renminbi use in Asia

The scenario we believe most likely, the regionalisation of China’s close trading partners, would be a major geopolitical development that will require a new approach to asset allocation, both globally and regionally. It would require a rebalancing of portfolios to achieve greater exposure to the Asian bloc, a gradual de-weighting of the dollar and up-weighting of the renminbi, and a deeper understanding of the sectors and companies that will benefit the most from intra-Asian trade.

There could be multiple implications for investors if this happens:

Recent developments underscore the move away from the dollar. President Vladimir Putin of Russia has called for the global dollar monopoly to end and Russian authorities are working on a de-dollarisation plan that would allow Russia to make its payments in other currencies. In 2018 the country offloaded about $80 billion of US government debt. In June this year, China’s holdings of US government debt fell to a two-year low, though it remains the biggest player in that market. Other countries will watch, and follow.

De-dollarisation
For many years, the dollar has been the standard currency used in world trade. For example, oil, gold and most commodities are quoted in dollars. Many countries hold their reserves in dollars, in the form of US Treasury Securities. De-dollarisation describes a move away from this world order to one where nations sell their US Treasuries to hold reserves in other currencies, or gold, and seek to use their own currencies for transactions between their most important trade partners.

The use of renminbi or yuan in different contexts is often confusing, but the terminology is similar to sterling and the pound. Renminbi is the broad name for the Chinese currency, meaning “the people’s currency” whereas the yuan is the unit of value. So goods are priced in one yuan, 10 yuan, 100 yuan – not one renminbi, 10 renminbi, etc.

Why our nation needs citizens to save for retirement