Timing the market - method or madness?

There’s a good reason behind the advice "It's about time in the market, not timing the market" - and investors would do well to heed it. Learn why here

While it’s true there may be many investors who’ve made money by seemingly timing the market correctly (in other words, by predicting market movements and selling or buying shares accordingly), the truth is – many of these success stories are likely due more to luck than to skill.

It might be different for seasoned traders, but for the average investor, it is not only difficult to foresee market upswings and downswings, but also challenging to make decisions that aren’t tinged by emotion.

Markets do not move up in a straight line, and volatility is inherent in equities as an asset class. And while it may be very tempting to try and predict wins and moves in the equity market, the only true alternative is time, or buying and holding.

‘When markets turn, they turn quickly’

US financial services giant Fidelity Investments makes the point that it is “very, very difficult to predict when is the best time to enter or exit the market. The speed at which markets react to news means stock prices have already absorbed the impact of new developments. When markets turn, they turn quickly.”

Investors would have seen evidence of this extreme volatility at the start of 2016, especially locally on the JSE. Daily moves of double-digit percentages have not been uncommon.

An analysis by international asset manager Fidelity, based on daily returns from the MSCI World Index from 31 December 2002 to 31 December 2012, illustrates that missing out on just the 10 best days over that decade would’ve “left your assets in negative territory.” Cumulative returns over the 10-year period for someone who had stayed invested were 68.96%. Missing the 10 best days meant a 4.64% loss, missing the 20 best days would have meant a 32.19% loss and missing the 30 best days saw a 49.08% loss!

In a separate study covering the period from 1980 to end-2012, Fidelity proved that “investing in global stocks for periods of 12 years or more has resulted in no negative returns.” This proves the value of time.

Merrill Lynch says, “One of the biggest costs of market timing is being out when the market unexpectedly surges upward, potentially missing some of the best-performing moments. For example, an investor, believing the market would go down, sells off equities and places the money in more conservative investments. While the money is out of shares, the market instead enjoys a high-performing period. The investor has, therefore, incorrectly timed the market and missed those top months.”

The scenario in South Africa

This phenomenon is not just confined to US or global markets. Research from Investment Solutions, based on I-Net Bridge data, shows that a R100 investment on the JSE (using the All Share Index as the proxy) would have grown to R1 760 over the two decades between 1995 and 2014. If you’d missed the 10 best days, your investment would be worth almost half that (R965). Miss the 60 best days and your investment would be worth a tiny R143. 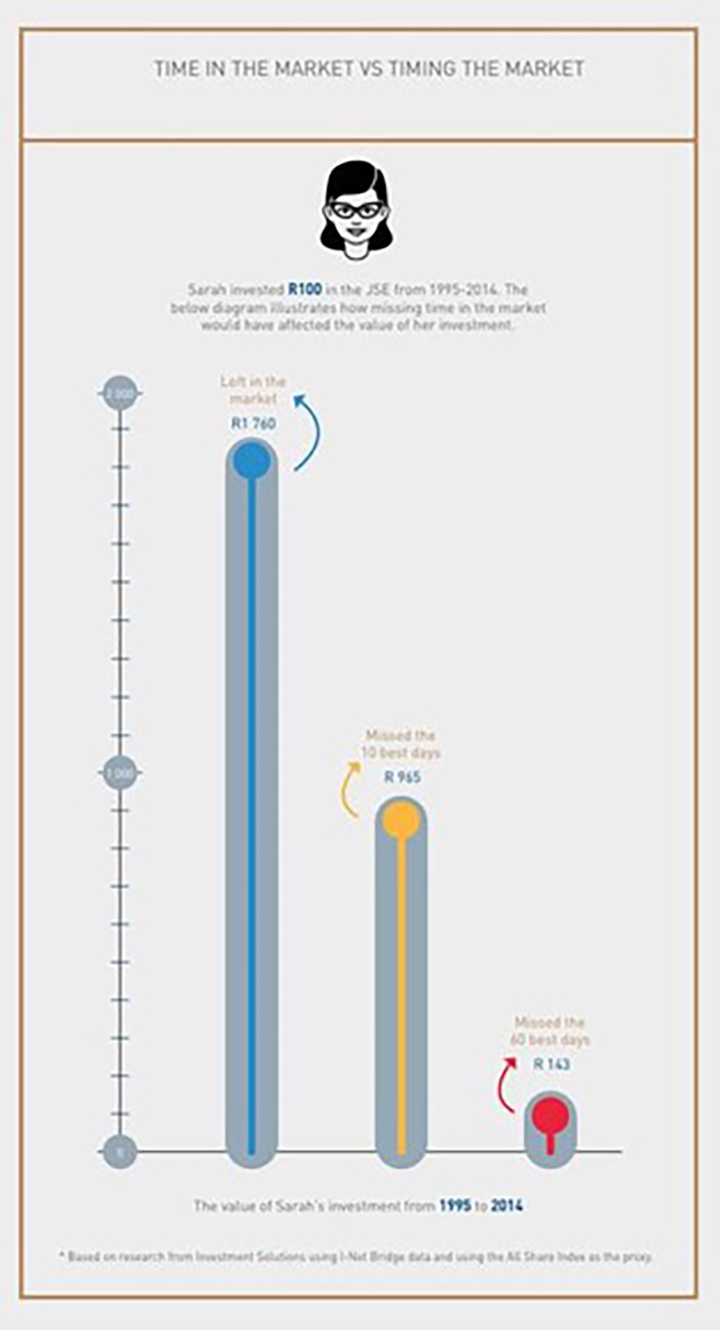 Advocates of market timing will point to the results had an investor missed the worst days. Indeed, the results are astonishing. The same R100 investment would be worth R3 697 had you dodged the 10 worst days on the JSE in the 20-year period. But it’s far easier said than done, and over a sustained period is all but impossible.

The other problem, aside from the mathematics that prove the irrationality of trying to time the market, is that following this strategy introduces unnecessary emotion into investing. A market’s best days tend to occur immediately after a market crash. Trying to time share purchases in a period of such enormous uncertainty is unworkable, precisely because of emotion.

Canada’s TD Bank Group says, “Market timers can be hard on themselves when they get the timing wrong and very excited when they get the timing just right. This emotional investing can lead to mistakes and stress. Rather than having the peace of mind that comes with a well-developed and implemented long-term strategy, market timers are more likely to worry about their investments and the market in general as they constantly try to stay one step ahead.”

Look to a long-term horizon

Instead, TD argues, investors follow a disciplined strategy, focused on asset allocation, diversification, investment selection and ongoing monitoring. The last of these means that even though you have a long-term horizon, you don’t simply buy and hold and ignore circumstances altogether. Any fundamental changes should trigger a review of your portfolio, with necessary adjustments. An investment professional like an accredited financial adviser would typically be the best person to help with this reassessment.

And to help offset market movements when buying, cost-averaging is a very important tool for an investor. This is when you invest an equal rand amount in an investment at regular intervals, ensuring that the price you pay for the investment averages out over a period of time. “When the price is high, you buy less; when the price is low, you buy more,” says TD, and “there is no guesswork whatsoever in cost-averaging.” This may mean you miss out on some of the gains, but it certainly helps reduce the sting of downturns.

Create and build wealth with our flexible investment plans

Our unique shared-value model rewards you for taking responsibility for your financial future. Our investment plans have unique benefits that reward you for saving for longer, investing more, and getting healthier. They include:

To take advantage of these innovative products, find out more here or speak to your financial adviser today.

Investing for retirement doesn’t have to be difficult. Speak to your financial adviser about your goals and how you can achieve them.

If you do not have a financial adviser, you can leave your details and Discovery Invest will call you back.

Request a call back

Investment mistakes and how to avoid them - part 1

Investing doesn't have to be a challenge. By following simple principles and avoiding common mistakes, you can enjoy the benefits of successful long-term investing. Discovery Invest looks at the most common but avoidable investment mistakes.!

Author Ayn Rand said, "Money is only a tool. It will take you wherever you wish, but it will not replace you as the driver." Steer your way to investment options that match your goals for 2018.

Investing for your children’s education is looking more and more like a necessity. By empowering the youth of today with a good education, you’re helping to set them up for a future full of opportunities.